Richard Caldwell (Dick) Brewer (1923-2014), a figurative painter’s painter, may be one of the most interesting, yet uncelebrated, gay artists in America mid-twentieth century. He belonged to a charmed circle of better known artist friends, and lived in the right places at the right times—postwar Paris and New York City. But his preferred choice of subject matter—male nudes, his relative isolation in Marin County in the San Francisco Bay Area--already out of the art world epicenter, and his fateful keeper choice of live-in companion and model, a former street hustler who lost his mind—all worked against his getting the recognition he deserved.

Brewer had a lifelong friendship with such art world notables as Samuel Wagstaff, Robert De Niro Sr. and his ex-wife, the artist Virginia Admiral, Nell Blaine, Leland Bell and Louisa Matthiasdottir—husband and wife painters.* His circle also included the film critic/author Pauline Kael, and painters Hyde Solomon and Lawrence Calcagno. Except for Admiral, Bell, Mattisdottir, and Kael (her ex-lover and father of daughter Gina, the poet and filmmaker James Broughton--Big Joy, was bisexual/gay, however), all were gay. But De Niro was deeply closeted (his son the actor has finally acknowledged his father’s sexuality) and most of the others were discreet about it. Brewer introduced Blaine to a painter friend from San Francisco, Carolyn Harris. They clicked, were together until Blaine’s death.

This group was further marginalized by their work—Blaine, Bell, Matthiasdottir, De Niro, were all more School of Paris “traditionalists” and were sideswiped first by Abstract Expressionists and then by the more trendy Pop Art movements. Brewer himself was influenced by the work of Picasso and Matisse, along with unfashionable late Derain and especially painter Jean Helion, who fled Europe for NYC, and whom Brewer befriended. Picasso and Matisse’s unabashed depiction and celebration of the female nude may have provided the incentive for Brewer to do the same with the male nude. But their nudes have long since been mainstreamed—suitable for display on mugs and dorm walls. Brewer’s male nudes—expressively painted, unabashedly erotic—remain transgressive. But his courtly manner and schooling in the old masters perhaps hamstrung his pursuing a Mapplethorpe “do it in the street and frighten the horses” campaign for recognition.

Brewer’s NYC artist friends are prominently featured in Jed Perl’s New Art City from 2005 and are often referred to as the second generation New York School. Bell, Blaine, Solomon, and Albert Kresch, another friend, all showed at the pioneering Jane Street Gallery (1943-1949), NYC’s first artist cooperative. Matthiasdottir, Blaine, and De Niro Sr. studied with the influential emigre painter Hans Hoffmann. It was at a lumberyard in Provincetown in 1942, where Hoffmann’s school was located, that Bell introduced Brewer to De Niro. According to Brewer, they were never involved sexually, but De Niro wrote to him tenderly:

”…As I look back (and I often do) the restaurant where we met had little to recommend it except you, sitting across from me, dipping your doughnut in espresso, your hair combed back on one side and over your eye on the other, wearing that quasi cashmere sweater with the inscription “I left my heart in S.F. (S.F. I took to be San Francisco). At that time, I think, your heart was intact and in your possession. You didn’t even know that I wanted it. I hardly knew it yet, myself. What’s become of us since?…."

Brewer met Leland Bell, his lifelong friend, in high school in Washington, D.C. Brewer’s asthma prevented him from serving in the military, so he enlisted in the Merchant Marines. He met Gide in Algiers, Algeria, “in a pissoir,” and then spent time in Paris post-war. He attended the Ecole De Beaux Arts, painted and drew his friends and pick-ups. Like the better known Samuel Steward (Secret Historian by Justin Spring) and John Rechy (author of Numbers and City of Night), perhaps influenced by the record-keeping bent of Kinsey, he kept a diary of his sexual history, beginning in high school. According to his journal, he and Rechy actually crossed paths at a bus stop in El Paso, Texas in 1966. If sparks flew, he didn’t record them. Other writings included pieces on “Biggest Cocks,” “Lost Chances,” “ Truckers,” “ Hitching,”  and detailed encounters of pick-ups in YMCA’s and hotels in SF, NYC, and D.C.

His relationship with Wagstaff was professional, beginning with Brewer’s approaches to him while Wagstaff was beginning his museum career as curator at the Wadsworth Atheneum, and sexual. Wagstaff became famous for his exhibitions, prescient collecting--he's credited with creating the modern market for photography, and his relationships with photographer Robert Mapplethorpe as lover and promoter, and with poet Patti Smith. Wagstaff, in a note, hails him as “Priapus Dick.” In another letter, he exudes "….how easy you are to get naked for & the special thrill of intimacy that your sexuality (& you can’t deny that, Baby) inspires. It’s also what your paintings do."

On the West Coast, Brewer knew several writers and poets, including poets Robert Duncan (whose partner was the artist, Jess), Pulitzer Prize-winning Gary Snyder, and the Beat poet Phillip Whalen. No doubt he became acquainted with Pauline Kael, who visited him at the Tiburon cottage in Marin County, across the bay from San Francisco, through Duncan—they’d been students together at UC-Berkeley, before dropping out. Brewer claimed to have resisted Duncan’s advances, telling him he had "quite a nice boyfriend in Jess already." But elsewhere he writes that Snyder and Bell would have been his ideal partners (“Where was love?”), had they been available. (Both, unfortunately for Brewer, were straight.) Evidence of his self-confidence and pluck: Brewer drew patrons of bars and cafes for pay, sometimes accompanied by Beat artist, Robert LaVigne, and claimed to have supported himself this way even, in the early '50s.

Brewer would have met Whalen through Snyder—both Brewer and Whalen manned fire watchtowers in the Sierras, Snyder’s home. Snyder’s tribute to Brewer appeared in the Aug. 1966 issue of Holiday Magazine**:


AUGUST ON SOURDOUGH, A VISIT
FROM DICK BREWER

You hitched a thousand miles
north from San Francisco
Hiked up there mountain           a mile in the air
The little cabin—one room—
walled in glass
Meadows and snowfields,          hundreds of peaks.
We lay in our sleeping bags
talking half the night;
Wind in the guy-cables,            summer mountain rain
Next morning I went with you
as far as the cliffs
Loaned you my poncho,            the rain across the shale----
You down the snowfield
flapping in the wind
Waving last good-by                 half hidden in the clouds
To go hitching
clean to New York;
Me back to my mountain:
and far, far west.

Brewer was also friends with San Francisco poet Joseph Kent, as was De Niro. De Niro himself wrote and published poetry and art criticism—he wrote the essay on Brewer in the context of the treatment of the male nude in art history for Brewer’s solo exhibition at the San Francisco Top Floor Gallery in 1979.

The Tiburon cottage, where Brewer hosted Kael, De Niro and Wagstaff, was Brewer’s anchor.  Located on Corinthian Island, in the now affluent Tiburon community in Marin, it was a mere 700 s.f.--a converted garage that had been part of the Big House owned by his aunt and uncle nearby.  He bought it with money from his father’s estate. His mother moved in, he followed in 1974 when she died. Steven joined him, and they were the resident Bohemians outliers, amidst the Bentleys and yacht-y types. He loved the tony address, even though he took the ferry across the San Francisco Bay to work a night job as janitor for architects’ offices.

The Top Floor Gallery solo show in 1979, housed in the Gay Community Center (later demolished, collateral damage in the shifting SF political scene after the Milk/Moscone assassinations) was Brewer’s apotheosis. The show even earned mention-- “…audacious in a different way…(with) an emphasis on genitalia,” by the acerbic, powerful art critic for the San Francisco Chronicle, Thomas Albright. The subject of the many of the paintings was his companion, Steven, a former street hustler and straight-identified. Brewer was in his mid-40s, Steven in his early 20s, when they met in the Tenderloin, and Brewer exhaustively catalogued his appearance, from street-hardened, working class tough beauty to later years of dissipation and mental problems. He also encouraged him to draw and paint, and they worked together, often depicting themselves and each other, in the cottage they shared, and filled.

A major setback, and source of lingering trauma for Brewer, was the destruction of thirteen paintings, most dating from 1969, by David, Steven's late brother. Brewer had been paying Steven to pose, often in the nude. The brother, a "petty criminal" according to Steven, broke into Brewer's Polk St. apartment in April, 1970, and slashed the paintings, many but not all of Steven, removing the heads and slicing the torsos. When Steven confronted his brother later about the break-in and vandalism, he responded that Steven had the "reddest dickhead he'd ever seen."

The surviving canvases, which Brewer kept, with the illustrated piece displayed on his Tiburon cottage wall, are in the archive of the GLBT Historical Society in San Francisco( except for the illustrated example).

I met Brewer at the Top Floor Gallery show. My now husband and I wandered by chance into the show, drawn by the sandwich board on nearby Van Ness Ave. with the show poster—a naked, sprawling male figure (Steven). Brewer and De Niro were both at the gallery. Years later, I was executor of his estate. As an artist myself, at a time of great uncertainty and change in the art world, Brewer’s neglected status grates, but will hopefully change. Nineteen of his paintings, including the poster painting from the Top Floor show, have been donated to the ONE Archives at USC in Los Angeles. The GLBT Historical Society in San Francisco also acquired several paintings and works of art.

*De Niro Sr. and Admiral both supported Brewer's work in practical ways: by buying it. De Niro proudly showed us his collection of five Brewer paintings when we visited him in his loft in New York City. Those paintings went missing after De Niro's death. Admiral paid $1000 (a record for an individual Brewer painting?) for his graffiti nude self-portrait, which she was willing to lend to a proposed exhibit at the well-known Alan Stone Gallery in New York. Unfortunately, her estate, rather than donating the painting to a New York museum, returned the painting to Brewer in its handsome frame. 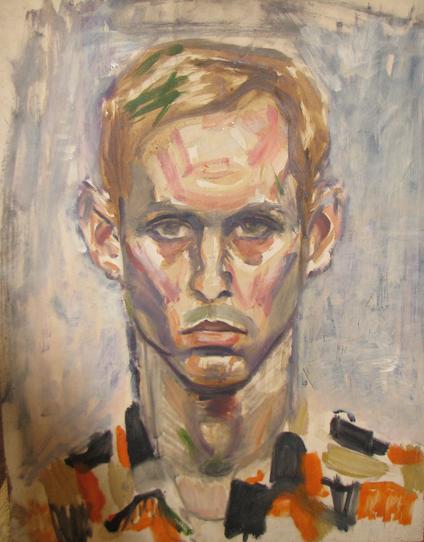 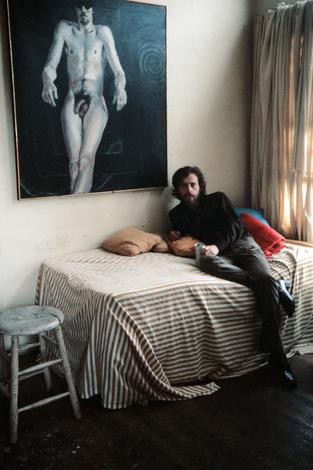 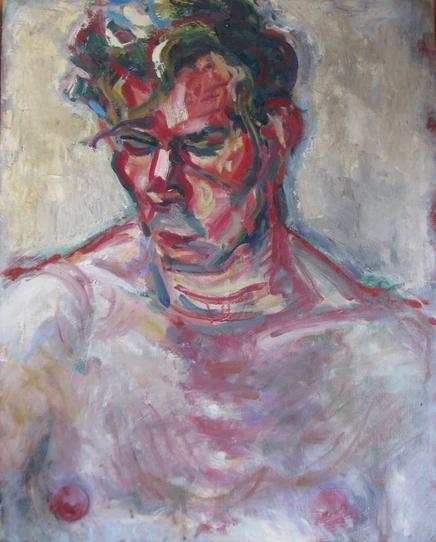 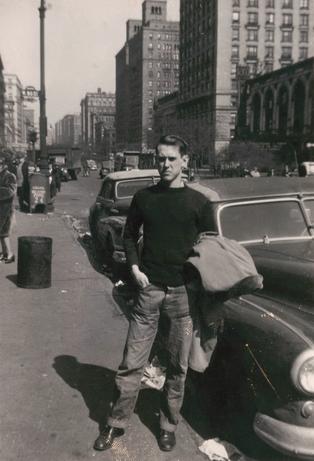 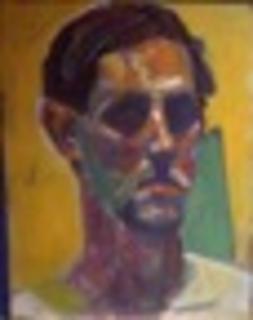 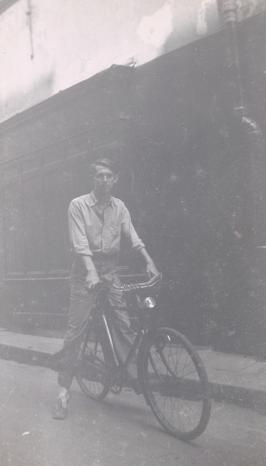 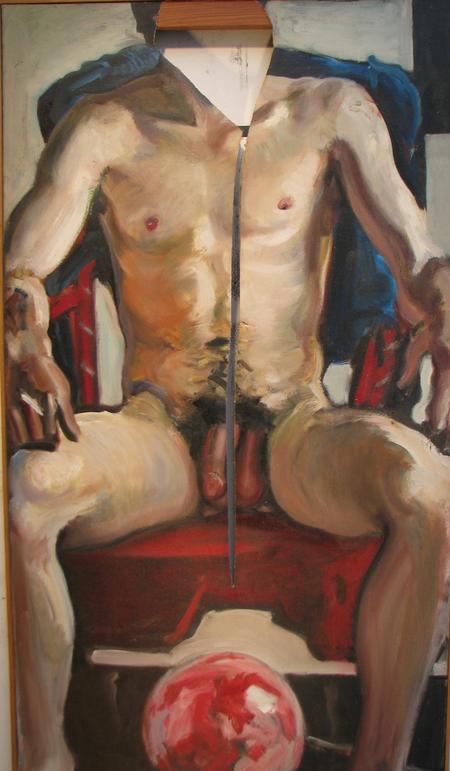 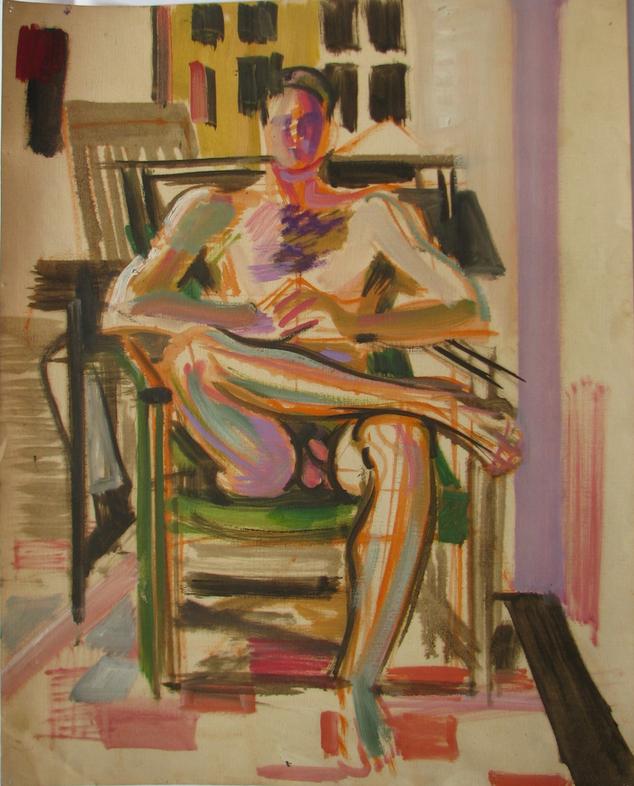 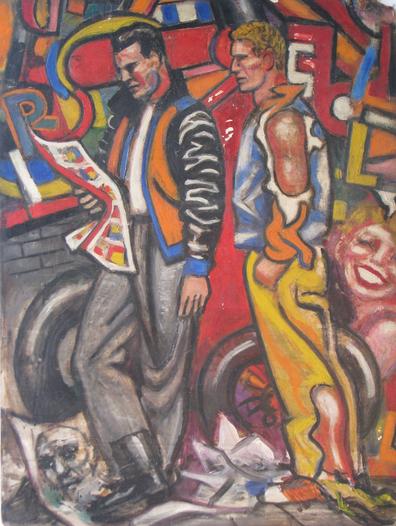 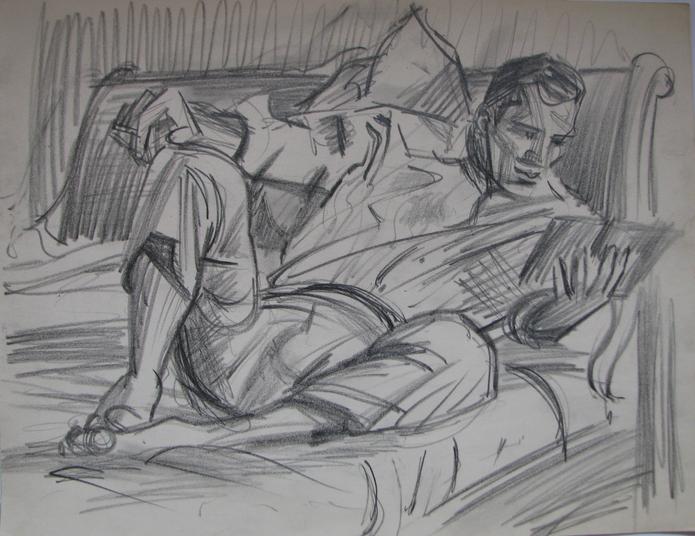 ​A portrait of Brewer's live-in companion, a former street hustler. At first glance, a romanticized portrait--red being Brewer's favorite color, but he added a graffiti head (self-portrait?) to the torso, the penis doing double duty as a tongue. And minus arms or legs, the figure appears trapped, without agency.

This is the painting we bought from Brewer on the installment plan after his Top Floor Gallery show.​