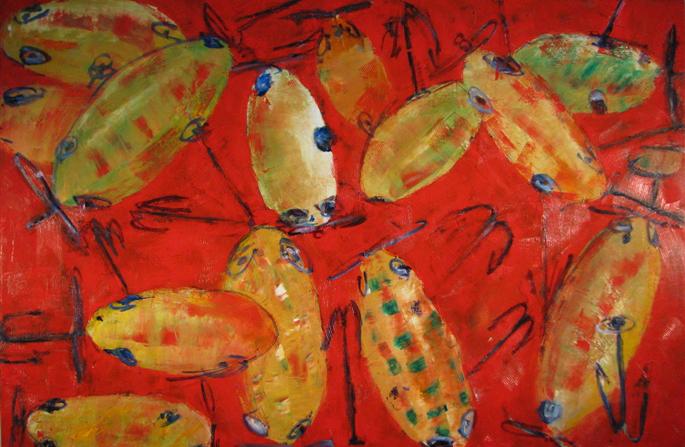 This woodblock occurred in a series based upon an old, lethal-appearing fishhook for fly-fishing I’d acquired at some point. I personally have no interest in fly-fishing, but the contradictory properties of the lure--barbed but banal in appearance--intrigued me.

I remember Jay DeFeo describing taking simple objects like tripods and false teeth and making mysterious and enigmatic images from them, that left viewers guessing about the starting-off point. To me, that’s much more interesting than a literal representation.

The lure suggested a series of paintings and prints, as I trolled for unconscious meanings and references.

By the time of the woodblock, the shape had morphed into something less three-dimensional. The hooks while abstracted remain, but the round body of the lure on a plaid background suggests a slide teeming with microbial life from a long-ago biology class. The colors may be “pretty,” but this could be mayonnaise in a potato salad gone bad...

“It’s our nature” to embody good and bad, just as Nature is degraded and defiled but splendidly resilient and potent. This woodblock exhibits similar dualities and contradictions. 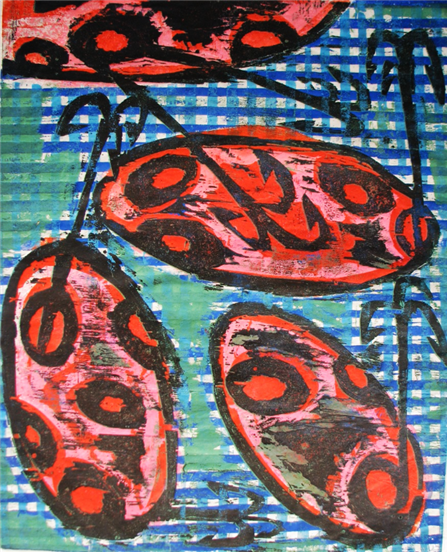