My reading of recent biographies of all three show surprising, overlapping themes.

Oscar Wilde of course is known world-wide, but perhaps so over-exposed, a cliche—“courageous, launched the modern gay rights moment with his unfortunate outing and imprisonment, tragic”—that he’s not re-evaluated as much as he might be. That may be corrected with the new Mathew Sturgis Oscar Wilde book.

Duncan Grant and George Platt Lynes (Giorgio to his friends) are far less well-known, except in certain circles. Grant is part of the Bloomsbury set, and so well-connected with his long relationship with Vanessa Bell, Virginia Woolf’s sister. Vanessa was married to critic Clive Bell, never divorcing after the relationship was over, and remaining friends.

Lynes’s early reputation came from fashion and commercial photography but his lasting legacy is a result of his unknown-in-his-lifetime male nudes, produced for his own perusal and satisfaction, known to trusted friends and contacts, and for his documentation of so many important writers, artists, actors, ballet stars and other creative figures of his time.

All came from relatively privileged, educated backgrounds, that perhaps allowed them to break molds, free themselves of restrictions more easily, having options and choices. Grant descended from a long line of Scottish landed gentry. Wilde’s father was a noted ophthalmic and aural surgeon, writer, and archaeologist, and his mother a noted poet, writer, translator, dubbed Speranza, and society hostess. Lynes’s father was a minster with cultural appetites in a well-to-do parish in New Jersey, his mother a devoted helpmate and decorator.

Our heroes were striking in their looks. Wilde was very tall, long hair (unusual at the time), arresting voice and manner, and clothing meant to be noticed, including knee breeches. Lynes and Grant were more traditionally handsome, Lynes’s blond hair turned gray early—earning the ”silver fox” nickname, he exercised, was suave. We’re told female fashion model subjects were disappointed to learn he was gay. He’s articulate and literate in his correspondence, even surviving the purge of other male gays by Gertrude Stein and Alice Toklas from their circle. Of course, it didn’t hurt that Lynes’s photograph of Stein resembling a Roman emperor was used on the cover of Time—like Trump, she was very transactional in her relationships, and developed his reactionary politics, too.

SOMETIMES THREE'S NOT A CROWD:

All maintained unconventional relationships—Wilde married and fathered two sons, but his most important, albeit foolish and reckless, relationship was with Alfred Lord Douglas, aka Bosie. Grant lived for decades with Bell, where they painted side-by-side and ran the Omega Workshop together, fathering a child with her. But he was primarily gay, maintaining a long relationship with David (Bunny) Garnett, who strangely enough married Grant’s daughter when she was in her early twenties  and he was 46.

Before that, Bell, Grant, and Garnett maintained an uneasy triangle in the English countryside, as Grant and Garnett did farm labor, avoiding military conscription during WWI. There were difficulties—guilt on Grant’s part, and jealousy on Bell’s. Grant declared late in life he never tuned down an invitation to sex, but Vanessa Bell went into the relationship clear-eyed, preferring the fellow painter and more easy-going Grant to the life she’d escaped with her sister Virginia, from her patriarchal, overbearing Victorian father. Grant became attached to the bisexual Paul Roche, after spotting him walking a bike, on a London street. He was most serious competition for Bell, with Grant even setting up a flat in London for meetings with Roche.

Lynes participated in his own menage-a trois for eleven years with an older couple, publisher/later curator Monroe Wheeler and novelist Glenway Wescott, outer ring of the Gertrude Stein circle in Paris, of which Lynes was a young acolyte. Like Grant meeting Roche, he, too, had a coupe de foudre experience: spotting a photograph of Wheeler, he announced “that’s the man for me.” Wescott went along, and both were helpful to his career—they suggested photography to Lynes, who originally planned to become a writer.

Lynes and Grant both escaped the barbarous trial/prison torture of Wilde, evading the puritanism of the McCathy era in Lynes’s case and Grant of legal prohibitions against “sodomy,”  ensconced as he was in the sophisticated, avant-garde world of Bloomsbury, in which public school same-sex relationships were commonplace. Maynard Keynes, an early Grant romance, could seamlessly transition to public heterosexual and famous economist, while remaining a Grant/Bell patron. Eccentricity and unconventionality were prized. However, in our own post-Roe times, with the Supreme Court possibly taking aim at our other hard-won civil rights like intimate sexual behavior and same-sex marriage, our heroes’ strategies for survival are instructive. Wilde was destroyed for his flamboyant behavior. Lynes and Grant eluded such a gruesome fate but Lynes was forced to be very cautious sharing his more explicit images, as was Grant whose erotic drawings only surfaced posthumously.

All three heroes were known for their attention to decor and design, in Wilde's and Lynes’s cases, contributing to financial ruin and bankruptcy. Wilde’s London Tite Street house was designed and furnished to fit his preference for Aesthetic style and fashion, befitting his swank life-style, with a history of debt collectors pursuing him beginning in his school days.

Lynes maintained elegant studio and living spaces, dressed well like Wilde, and liked entertaining. Lynes’s problem was that his studio fashion/commercial photography, theatrically-lit set-ups, that paid the bills fell out of fashion. A brief move to Hollywood was a financial disaster (the decorator’s bill was contentious, and outstanding), and his return to his natural habitat of Manhattan was rocky. His Madison Ave. studio was inherited by Richard Avedon, representing the “new” photography—especially hurtful since Lynes hated his work. In later years, he survived on loans from friends and relations, undermining the relationship he had with his brother and sister-in-law, the ones he turned to first, even moving in with them for a time.

Wilde's finances was undone by the Marquis of Queensbury scandal, his very public outing and imprisonment, even as his plays were packing the theaters.

THE VICISITUDES OF FAME AND FORTUNE:

The new Wilde biography suggests the inevitability of Wilde’s fame, since he anticipated the Kardashian/Instagram era—courting fame, attaching himself to famous actresses, accepting any publicity or public mention even if mocking—fame and fortune preceding actual work production, which was sadly, abruptly foreclosed with his most humiliating fall, but for his De Profundis mea culpa of regret and shame, quickly forgotten by Wilde upon release from prison with his renewed pursuit of Bosie.

But Wilde studied Greek tragedy, and almost courted it, with his flamboyant attraction to commercial sex with young working-class men (often gifted with silver cigarette cases—more profligacy), a passion he shared with Douglas, and his uncautious provocation of Douglas’s angry, emotionally-disturbed father with, we learn, sexual dysfunction issues ending his marriage and his own courtroom exposure.

At his peak, Wilde met and knew most of the famous and gifted in England and France, like Whistler, Yeats, and Swinbourne, even befriending Whitman in America, on one of his money-making tours to the “provinces.”

Grant endured up and down fame: early success, young imitators, then ho-hum and sidelined. Even his 1959 Tate retrospective wasn’t a great hit. As Spaulding writes: “…In the eyes of the critics, Duncan belonged to a period that was then in disfavor—and no one falls as far from favor as a favorite.” The reception was somewhat better for his large Wildenstein Gallery show in London in 1964, his eightieth birthday year, but still, according to Spaulding, “…recent exhibitions had introduced a British audience to the American avant-garde and the resulting trend towards large-scale abstract art made Bloomsbury painting seem very English, dilettantish and old-fashioned. In addition, Bloomsbury’s critical reputation was at its lowest ebb. ‘Their comfortable, moneyed indulgence of life and of beautiful things seems to us to  us now to belong to belong more to the twilight of old England than to the dawn which they believed they were heralding,’ wrote Edward Mullins in the Sunday Telegraph’.”

Bloomsbury-mania didn’t erupt until the Virginia Woolf bio by her nephew, Quentin Bell, in 1971. Now, Charleston, the farmhouse in rural East Sussex house shared and decorated by Grant, Bell, and Clive Bell is restored, open to the public, and a cultural beacon. Originally a rental, the house was neglected in Grant’s old age, but restored later, and maintained by a Trust.  Janet Malcom’s stunning, lengthy article, “A House of One’s Own: Virginia Woolf was Bloomsbury’s genius, but her sister, painter Vanessa Bell, created it’s shrine,“ in the June 5, 1995 issue of the New Yorker, on Charleston and its leading lights, was showcased in her New York Times obituary. Charleston.org.uk.

Lynes’ work is also reaching greater audience, with publication of first biography, George Platt Lynes: The Daring Eye, by Allen Ellenzweig, borrowing heavily upon a long history by his writer/editor brother, Russell. Facing death, Lynes successfully placed many nude photos with the Kinsey Institute, negotiating for their availability to the public after his death.  Lynes, Wheeler, and Westcott gravitated to Kinsey, promoting an acceptance of homosexuality as “normal” in the name of science. Wescott conducted an indiscreet affair with Kinsey, and Lynes allowed Kinsey to observe him in a sexual encounter—Kinsey was very impressed, according to Ellenzweig.

Wilde was of course sui generis, but Lynes is a transitional figure to later photographers like Mapplethorpe, and Grant’s reputation expands, with his long, quietly liberated life coming into focus.

The  Duncan Grant biography by Francis Spaulding is serviceable, with few quality reproductions. A Room of Their Own:The Bloomsbury Artists in American Collections traveled to Mills College in Oakland in 2009, where I felt lucky to see it. The catalog is wonderful—who knew Jasper Johns collected Omega Workshop dinnerware? Bloomsbury and France: Art and Friends, by Many Ann Caws and Sarah Bird Wright, 2000, is full of Grant and Bell, not to mention Picasso and Matisse, with too few color illustrations. The Tate Museum’s Queer British Art 1861-1967 is packed with illustrations, and interesting text. The survey crosses disciplines and media, the well-known and the obscure.

Hermione Lee’s Virginia Woolf biography is indispensable, with much material on Grant et al. Gillian Gill’s more recent Virginia Woolf and the Women Who Shaped Her World is provocative and argumentative, and Vanessa is portrayed as villain, especially about keeping Angelica in the dark about Bunny, until too late, after the wedding. Gill also fusses about Vanessa’s photographs of her nude young sons.

Justin Spring’s Secret Historian: The Life and Times of Samuel Steward, Professor, Tattoo artist, and Sexual Renegade is interesting reading, and there’s a local angle: Steward lived in a cottage on 9th St., off University Ave., in Berkeley, and his tattoo parlor was in Downtown Oakland. Steward was a friend and correspondent of Lynes—they had Toklas, Stein and Kinsey in common, and Lynes gifted Steward some 50 prints. Steward’s final years, and affairs, were a mess—whatever became of the photographs?

Shelves stagger under the weight of Wilde material, but I especially enjoyed the The Annotated, Uncensored Edition of the Portrait of Dorian Gray, edited by Nicholas Frankel, 2011, heavily illustrated. The new Oscar Wilde by Michael Sturgis, 2021, is invaluable. Wilde’s fairy tales are immensely sad. His best play, The Importance of Being Earnest, is absolutely wonderful, with an hysterical pitch, as if Wilde knew the jig would soon be up. 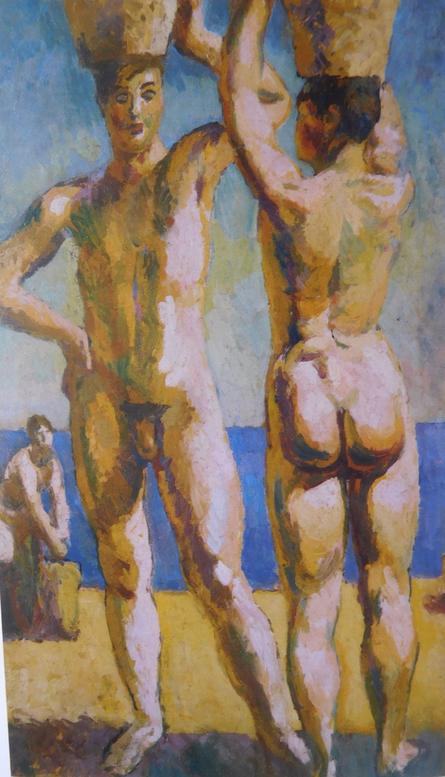 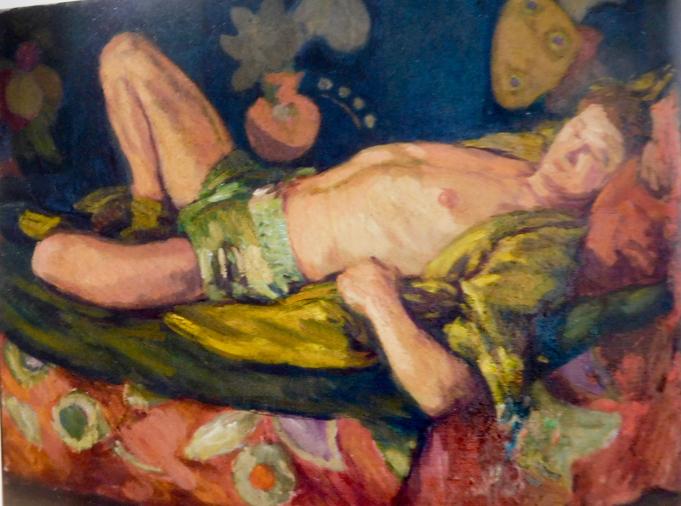 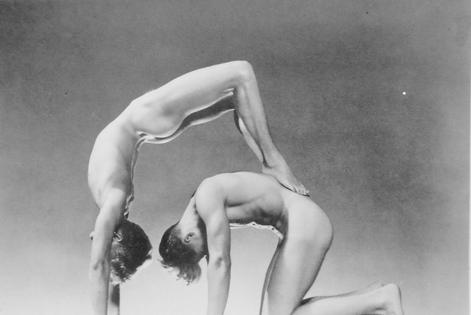 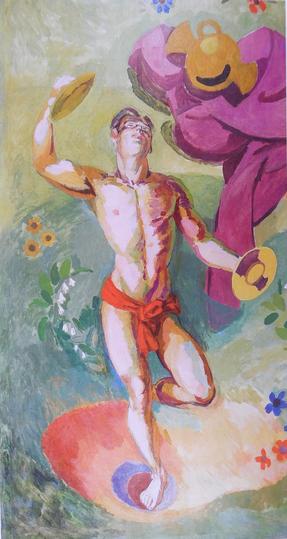 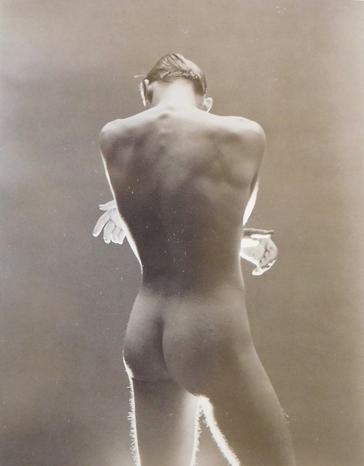