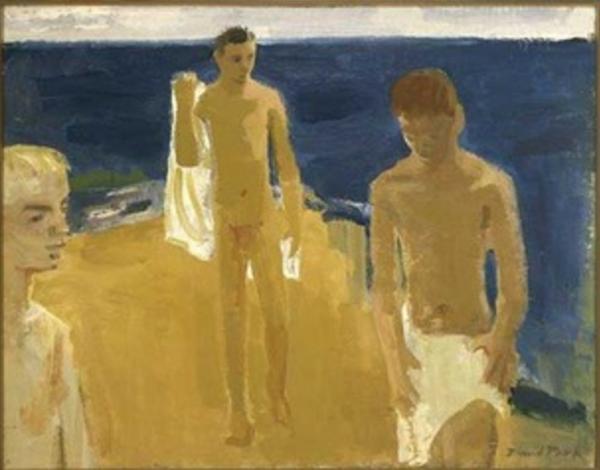 ​​“Queering” David Park: Is It Fair to see Homoerotic Subtexts in Park’s imagery? 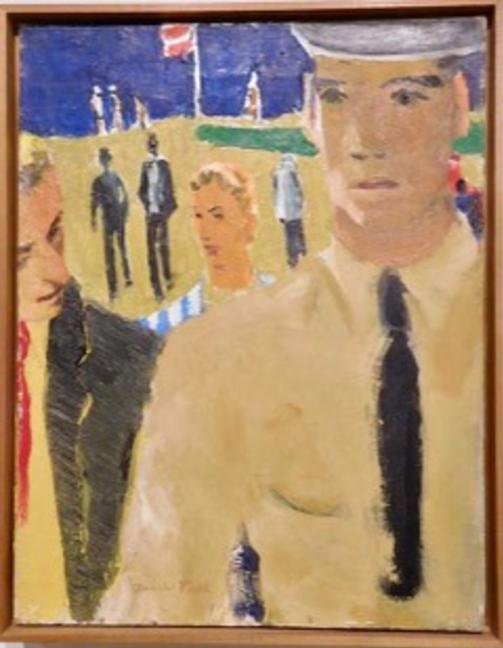 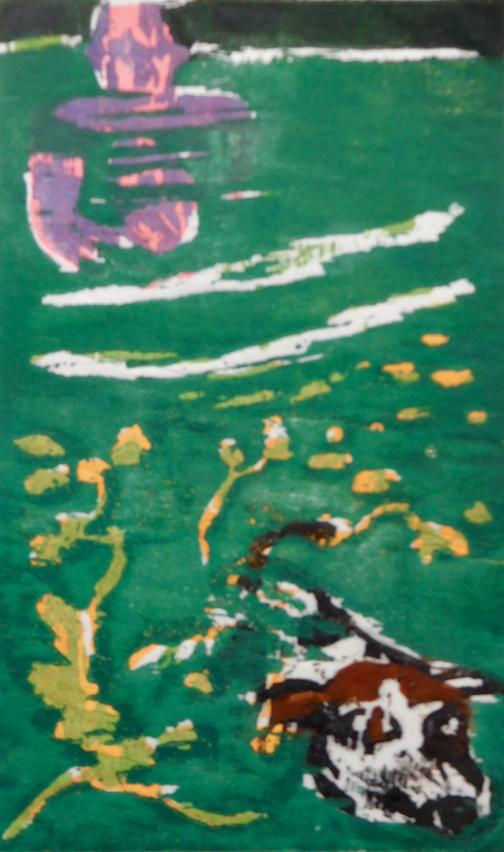 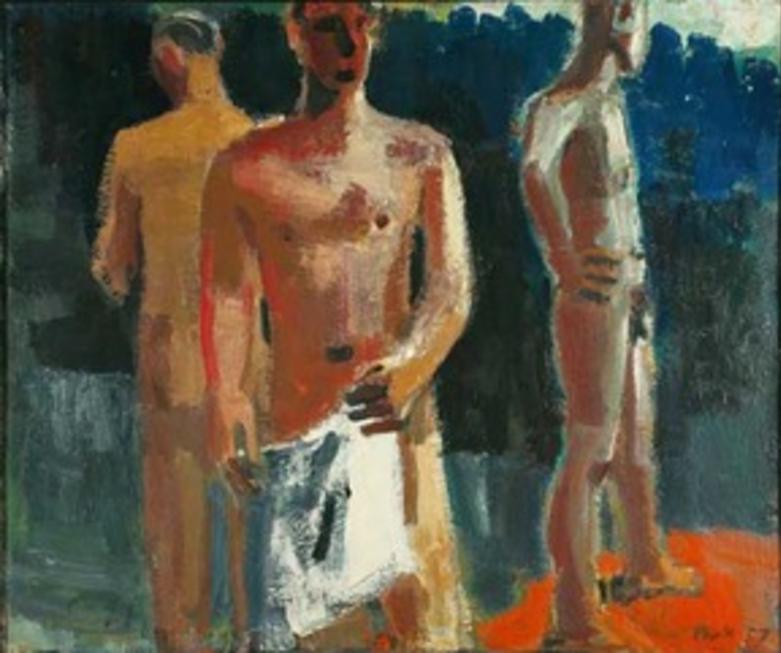 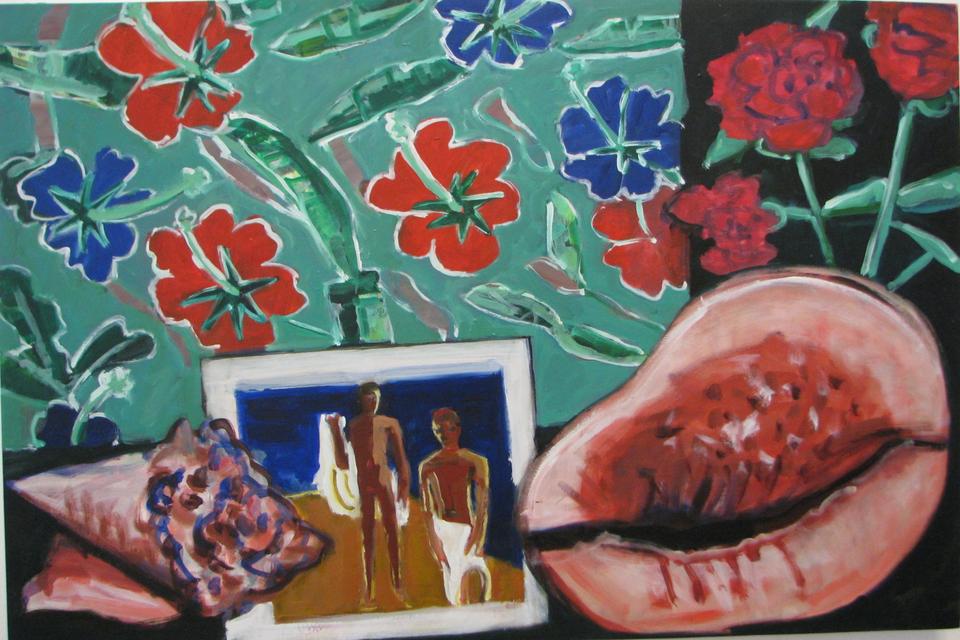 From the perspective of the present, after Mapplethorpe bomb-throwing, the swinging 60s and “sexual liberation,” the gay and women’s movements, Park’s nudes may seem a bit quaint or tame, yet in the repressive, hidebound, straight-jacketed 50s, his cavalier use of nudes would seem even more revolutionary were it not for the fact that he was a painter’s painter, pleasing and painting for himself and his circle, aloof to the pressures of the art world, and living, even then, in a cosmopolitan bubble, the liberal Bay Area.

(Of course, the 50s were still bound by conventions that segregated the sexes: Boy Scouts and Girl Scouts, Brownies and Cubs. So, in a sense, he was describing youthful tribes created by the culture. But, pointedly, a very long way from the hellions described in Lord of the Flies.)

Park declared he “loved bodies.” Boas observes: “Most viewers of Park’s paintings of male nudes attribute the energy of the figures to the painter’s strong sense of humanity and ability to bring all aspects of his painting to work together. Theophilis Brown…wondered whether Park’s choice to paint male figures, as in Standing Male Nude in the Shower, was not some deeper rebellion against the female nude. ‘David was really a rebel. He liked controversy, and he liked to upset the establishment very much. I think he was tired of straightjacket stereotyping’.” p. 194.

A comparison with figurative work by his friends and contemporaries, Bischoff and Diebenkorn, is illuminating. The Park 2020 retrospective includes examples of life drawings by Park, Bischoff, Diebenkorn, Wonner, Brown and others. Park’s male nudes are sensitive, wry, sensual. Bischoff’s female nudes get the same due, with an emphasis on sensuality, but Dienbenkorn especially draws the line at male nudes. A rare male nude, from his sketchbooks now at Stanford, show an academic drawing of a bald, muscled, hard, almost militaristic figure.

It’s no surprise that Diebenkorn, often skipped sessions at Park’s house, if he knew the model was going to be male. I can’t locate the reference, but it’s apocryphal. On the other hand, his pen or pencil often seems to caress the female form as he renders it.

I had the fortuitous chance to put my questions about gay subtexts in her father’s work to Helen Park Bigelow at a book-signing at Mythos Gallery in Berkeley. I was nervous but determined (how often would you get the opportunity?), and framed my question as delicately and elliptically as I could. Graciously, not at all defensively, said she could appreciate my interpretation, which others had made as well, but didn’t agree with it, either.

I remember, party because of the incongruity, reading Stephen Greenblatt’s Will in the World: How Shakespeare Became Shakespeare, while staying in a rustic cabin at the Malocas Jungle Lodge along the Rio Preto da Eva in Amazonas, Brazil. While we were there, against the incessant loud backdrop of frogs (and, ominously, chain-saws), I intently read Greenblatt’s interpretation of the sonnets, wresting with what appears to be a triangle between the poet, the handsome young lord who’s his patron and whom he worships and desires, and the “dark lady” mistress, coarser sexually, whom he simultaneously requires and rejects. Greenblatt concludes that the reality of the relationships is unknowable from the poetry—Shakespeare employed ambiguity.*

That is Shakespeare’s greatness, his open-endedness and suggestions of possibilities, and one reason why he remains relevant today. Same for Park. His “humble” scenes, settings, and figures are timeless, not stuck in the 50s but speaking to us 60 years on. Maybe those scenes of boys at the beach, nude but not naked, nude and naked, are purely wholesome nostalgia, Park reliving his youth in an idyllic California setting. But maybe in his studio Wonner and Brown poked Park in the ribs, chortling over the imagery, and Park laughed along.


* For whatever actually happened between Shakespeare and the young man—whether they only stared longingly at one another or embraced, kissed passionately, went to bed together—was almost certainly shaped by an overwhelming sense of transience. This sense did not only, or even principally, derive from the age and class difference that intensified their desires; it derived from the period’s understanding of male homosexual love. Elizabethans acknowledged the existence of same-sex-desire; indeed, it was in a certain sense easier for for them to justify than heterosexual desire. That men were inherently superior to women was widely preached; why then wouldn’t men be naturally drawn to other men? Sodomy was strictly prohibited by religious teaching and the law, but that prohibition aside, it was perfectly understandable that men would love and desire men.”
Will in the World, Stephen Greenblatt, p. 253

Same goes for other patriarchal cultures like ancient Greece and Rome, where women, children, and slaves were subordinated, allowing same-sex attraction and relationships between men to flourish. I’ve returned to the relationship of Hadrian and Aninous over the years, in paintings, drawings, and prints. Rufus Wainwright recently debuted his opera on the Hadrian/Antinous theme. 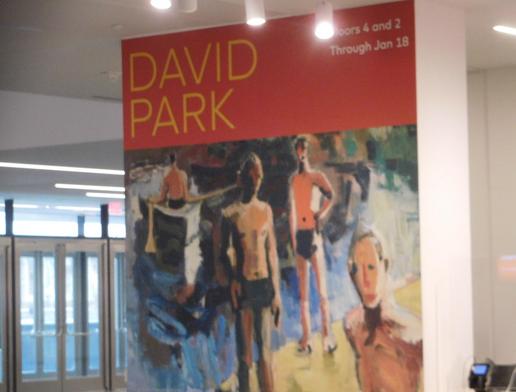 “Park’s willingness to plumb personal memories and explore emotional issues is also suggested by the bold Standing Male Nude in the Shower of 1955. There canvas shocks with its size, palette, and aggressive composition. The male figure is life-sized, deep red against yellow and cerulean blue; he meets our gaze with an unfathomable expression made more obscure by the shadow cast over his features. There is no effort at eroticism here, no coy avoidance of the viewer’s gaze.”(emphasis added) p. 27
Bay Area Figurative Art, Carolyn Jones, SFMOMA, 1990

David Park died in 1960, age 49. By all accounts, he was happily married to Lydia Park (later Lydia Park Moore), who was appreciative and supportive of his art, and the father of two daughters, one of whom, Helen Park Bigelow, is the author of the  book, David Park Painter: Nothing Held Back, about her beloved father.

But why must these critics, curators, and biographers place Park on such a chaste, hetero-normative, binary pedestal, as if we were still living in Park’s most productive period—the 1950s?

I’ve always been amused and cheered by Park’s rendition of what could be interpreted as outdoor gay cruising scenes, nude boys at beaches, young men walking purposefully in the underbrush, and other same sex groupings. I wouldn’t describe any of his nudes, male or female, as prurient, but they’re not shy either.

Mills, Jones, and now the important upcoming David Park retrospective, curated by Janet Bishop, at SFMOMA, Spring 2020 and traveling (catalog: David Park: A Retrospective), all show Park’s free use of male and female nudes, often in outdoor settings such as beaches and lakes. Park is described as casually choosing to clothe a figure, then painting the clothing out, creating flesh, or vice versa. He participated in life drawing sessions with other key participants in what came to be known as the Bay Area Figurative movement, but also pulled figures and poses out of his head, invented or from memory.

There’s another aspect to Park’s biography, too, that may explain his mind-set. The rebellious son of a Boston Unitarian minister, alienated from the rigid, straight-laced social structures of his youthful home, he delighted in the openness of the West. He followed his artist aunt to Los Angeles, and study at the Otis Art Institute. As a mature artist, he painted sarcastic, “caricature,” paintings (Mill’s term) skewing the pompous and bourgeois. (It must be noted many of his targets are middle-aged, well-dressed society women.)

Mills wrote, “Park’s urge to do sarcastic caricatures was related to his interest in portraiture… According to Diebenkorn, ‘He wanted very potent, demanding subject matter; he wanted to bite’.” p. 77

The definitive Boas bio of Park describes his circle as intellectuals, academics, musicians, and writers, as well as artists. He was considered a thoughtful, serious thinker, despite a limited formal education and deceptive humble facade. His social set enjoyed raucous dinners and lively conversation—they were Stevenson Democrats in the Ozzie and Harriet Eisenhower 50s of freeways and normalcy, after the long nightmare and privation of the Great Depression and War War II.

Park was part of a set of artists that also included gays. Painters Paul Wonner and William Theophilis Brown were life partners, with studios in the same Berkeley Shattuck Ave. building as Diebenkorn and participating in the life drawing sessions with Park, Bischoff, and others. When Wonner and Brown moved to Los Angeles, where Wonner had accepted a teaching job, they palled around with Christopher Isherwood and his boyfriend, artist Don Bachardy. (See Living Room at I’s, from 1964, by Wonner, Bay Area Figurative Art, p. 100)

Paul Mills, the curator for the OMCA who organized the seminal Bay Area Figurative show collaboratively with Park, Bischoff and Diebenkorn, himself came out as gay after his wife died. He was active in gay liberation in Santa Barbara where he moved after his OMCA period, to work at the Santa Barbara Art Museum. His late-in-life coming out is depicted by his son Mike Mills in the movie, Beginners. The Tournament illustrates the cover for his Park book—what is going on there if not a triangle of sorts?

To step back for a moment, gay life in the 50s, before Stonewall, before the Compton Cafeteria “riot” in the San Francisco Tenderloin, gay sex was illegal. Ditto anything the authorities could deem “pornographic.” Roy Cohen and Senator Joe McCathy went after “queers” and “commies” in the government and military. “Pinko” merges the two threats.

Gay bars were furtive places, often owned and operated by the mob, and the police raided at will. Outing could destroy lives, careers, families. Cruising for sex was dangerous—one might pick up “rough trade” and be beaten or worse, or respond to an attractive police decoy in a “tea room” or public john and be arrested, your name dragged through the newspapers.

Aquatic Park in Berkeley is a long-time cruising spot. In 1968, not long before I moved the Bay Area, 33 year old Frank Bartley was shot to death there by an undercover cop who blamed Bartley for his own death, for “resisting arrest” and “reaching for his groin.” As recently as 2014, the body of a 51 year old man was discovered at the park, the police said his death was “suspicious.” The more things change….

In Gore Vidal’s notorious break-through novel, City and the Pillar, the protagonist, Jim, kills his former lover, Bob, who disavows his past and their affair. (Vidal later softened the ending, Jim “just” rapes Bob.) “Daring” movies like The Servant from 1963 were ominous warnings, with perverse and twisted homosexual themes. Ruin was to be expected.

The closet was toxic, suicide and murder not uncommon, but life in the open wasn’t yet really possible either. Except in tolerant, knowing circles. Surely Wonner and Brown’s relationship was known to other artists, nor did the artist Jess and poet Robert Duncan hide their artistic and personal relationships—they were hiding in plain sight. In 1953, Park exhibited at the pop-up King Ubu Gallery, run by Jess and Duncan.

How refreshing, then, to find in Park handsome young men, standing nude on the beach, unabashedly facing the viewer, or on outings, hikes, and boating. Pastoral, idyllic Arcadias. But are they that “innocent?” And are the nudes neutered? Even boys and girls have desires, drives, urges, and passions—beating hearts.