The issue facing many artists today: What will become of their work, or their friends’ work, after their deaths? Even artists of limited means or access to powerful “players” in the Art World, can still work to preserve, conserve, document, promote, and place their own artwork, as well as artwork by friends, collaborators, and mentors during their lifetimes and then when they’ve died.

But learning to navigate Legacy Land is a steep learning curve!

Preventing artwork from becoming mere flotsam, tossed to the curb or into dumpsters, is an uphill battle in general. Natural disasters and wars; the fragility of paper, canvas, panel; obtuse or even unsympathetic families/heirs; blind fate, all mean a Van Gogh-like posthumous superstardom is the exception--most posthumous careers must begin, if all at, during the artist’s lifetime. New obstacles in Legacy Land include the decluttering, anti-hording mania, a lack of appreciation for the relics of the past (“brown furniture”), twitter and texts replacing letter-writing, etc.

But, with luck, an artist’s family, friends, other artists, enlightened patrons and professionals can all play a role.

Legacy-maker par excellence: Jo van Gogh-Bonger. Van Gogh-Bonger was the wife of Theo, and sister-in-law of Vincent. Theo died shortly after Vincent, and his prominence is the result of the careful work of Jo van Gogh-Burger, who moved back to Holland from France with the artwork, promoted the work in influential circles of critics, arranged exhibitions, and carefully sold work off, placing paintings like the sunflowers in important collections. Their son ultimately left the paintings still in the family's control to the Van Gogh Foundation he created.

An article about Van Gogh in the London Review of Books introduced me to the term “Deathtime.” All of Van Gogh’s success occurred after death. Deathtime, as I’m learning, has its own rules, timeframes, protocols.

Historically, other than Van Gogh and his sister-in-law, a list of examples of people (not always artists) expending energy on behalf of others would include Berenice Abbott, who bought the archives of the photographer Eugene Atget, ensuring his place in the pantheon, even the landlord of Henry Darger, who saved Darger’s work in his apartment after his death.

“Outsider art” seems especially vulnerable to loss, although Judith Scott and her sister’s story is one happy exception. Scott, with Down syndrome, was institutionalized before her sister rescued her, and arranged to have her make art at Creative Growth in Oakland, where I was introduced to her by Leta Ramos. Her sculptures wrapped in yarn now have an international reputation.

Germ of a proposal cooked up by fellow artist Art Hazelwood and myself for a necessary exhibition:

Art Hazelwood (arthazelwood.com), SF based artist with studio in Richmond, SFAI adjunct printmaking professor, and curator/impresario, would co-create this hypothetical show, which would focus upon the role of artists helping other artists, and continuing after death.

It may seem counter-intuitive, even self-defeating, for artists to advocate for other artists, especially those not around to do it for themselves. There’s not enough to go around, especially in these times. My MFA graduating class was dismissively billed 32 Degrees by the curators at the University Art Museum in Berkeley—they thought we were too many. (And some obliged them, by disappearing. Not classmate Shirin Neshat, however.)

Most of the artists, in our hypothetical show, knew each other, showed with each other, even depicted each other. There are some surprising connections and overlaps, and the fact that Hazelwood and I both curate shows means that we were able to showcase these artists in their lifetimes.

Hazelwood’s printmaking work in silkscreen, linocut, and woodcuts is one connection to the work of Wolff and Ragle, and why they became friends in the first place. (The same reason I connected with all three of them.)

With M. Louise Stanley, I organized Some Portraits (1987) and Multiples (1987) for Pro Arts in Oakland, exhibits which included William Wolff (1922-2004), Roy Ragle (1941-2014), Herlinde Spahr, and Richard Caldwell Brewer (1923-2014). In the mid-1970s, as a young art student, I met Casper Banjo (1937-2008) in his capacity as T.A. for the trippy Gerald Gooch, in printmaking classes at Laney College. Decades later, we met again—with a group of friends, he came to the closing party for my de Young Museum residency. His work has gotten more attention, after his death at the hands of police, two years after our brief reunion. He would be included in our exhibition, too.

Stanley herself has a couple of flat file drawers of her late father’s work, a talented watercolorist. His works resembles hers, they even painted the same scenery, but he didn’t include her humor or politics. She’s said if she ever had a retrospective, she’d have a wall of her father’s work.

I included Art Hazelwood in an exhibit with the Berkeley Art Festival in 2012, and he included Ragle, Wolff, and myself in his impressive survey exhibition, California in Relief: A History in Wood and Linocut Prints, at the Hearst Art Gallery, St. Mary’s College in Moraga, in 2009. He added Ragle and myself to his exhibit In Extremis—Prints Monumental, Intimate and Encompassing, at Meridian Gallery in 2011.

Hazelwood got the Whitney Museum to acquire several Wolff prints, and St. Mary’s College in Moraga, to mount a Wolff retrospective, with handsome catalog. He arranged for Wolff’s show at the Charles Campbell Gallery in SF, and showed with Wolff at ArtZone 461 in SF.

Many Ragle prints were acquired by St. Mary’s and elsewhere, including additions to those already in the collection of the Achenbach Foundation for the Graphic Arts, Fine Arts Museums of San Francisco. Ragle had an important show there during his lifetime. The Los Angeles County Museum just acquired Ragle’s masterpiece triptych. Artist Herlinde Spahr has worked with Hazelwood, and with Ragle’s widow, Carol, to promote his work. The exchange of illustrated letters between Ragle and Spahr was acquired by the UC-Berkeley Bancroft Library.

My husband, Alfred Crofts, and I met Richard Brewer (1923-2014) by chance at his 1979 Top Floor Gallery solo show, at the SF Gay Community Center. This show was his pinnacle. His choice of subject matter, and move to the Bay Area from New York City where his circle of friends included better known artists like Nell Blaine, Robert De Niro Sr., and Leland Bell, meant his reputation suffered.

During his lifetime, besides the Pro Arts show, through my efforts Brewer was included in Some Faces at the Walnut Creek Civic Arts Center (1987), X-Rated, at the Berkeley Art Center (1984), and 3 Generations, Space 743, in San Francisco (1999).

See essay on Brewer elsewhere on this website, under Articles.

The End: No need to smooth it over—Death is profound, often tragic. But Art may be a precious solace, linking living and dead. Borders and boundaries are fungible and porous.

The April 18, 2019 Hyperallergic article, "What Should Artists Do with Their Work After They Die?," by Hrag Vartarian, is an obvious point of reference, as is A Visual Artist’s Guide to Estate Planning, available as a readable pdf.

With time and expertise, digitalize your archive, inventories and record-keeping good. Write up with a narrative of life and work, that helps to tell your story and perpetuate the legacy.

This painting is one of series that depicted my studio with work along Brewers, awaiting new homes. Includes my Multiple Puglseys painting and David XV, with Brewer self-portrait and portrait of

Steve, his companion/model and Mikhail, the YMCA lifeguard (sideways on cart).

Leola served in the WACS at the tail end of WWII, stationed at the Pentagon and never making it to Europe, her goal. She obtained a master’s degree from Northwestern University in 1948, taught for 41 years in the elementary schools in Kenosha.

Were she and Elaine more than housemates? Who can say, except that she suffered the indignity of double loss: after Elaine died, her relatives swooped down and seized her things—Leola had no (legal) claim. That I don’t even know Elaine’s last name, she was never on my parents’ radar, says it all. (For a fictionalized version of this all-too common tragedy, see If These Walls Could Talk 2 from 2000, the episode set in 1961 with Vanessa Redgrave, with the surviving partner faring even worse than Leola.

Leola made watercolors on her travels, belonged to the Kenosha Art Association according to her obit.  After my mother’s death, I inherited two of her watercolors she’d given my mother, which I’d seen over the years at my parents’ house. One depicted a lighthouse. A shock to realize her lighthouse was my subject, too, from my Lighthouse near Wingspread woodblock. Wingspread is the Frank Lloyd Wright-designed house for the Johnson Wax family in Racine, adjoining Kenosha. (Yes, Paul Ryans’s district, remember him?) Visiting Frank Lloyd Wright buildings in Wisconsin and Illinois helped to ease the difficulties of trips “home,” which is why I got to Racine.

Leola and I had both been “to the lighthouse,” decades apart, both inspired enough to want to record it. 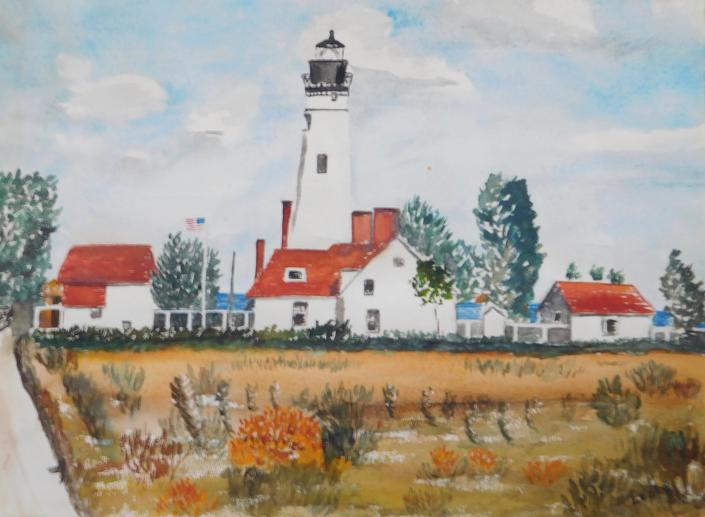 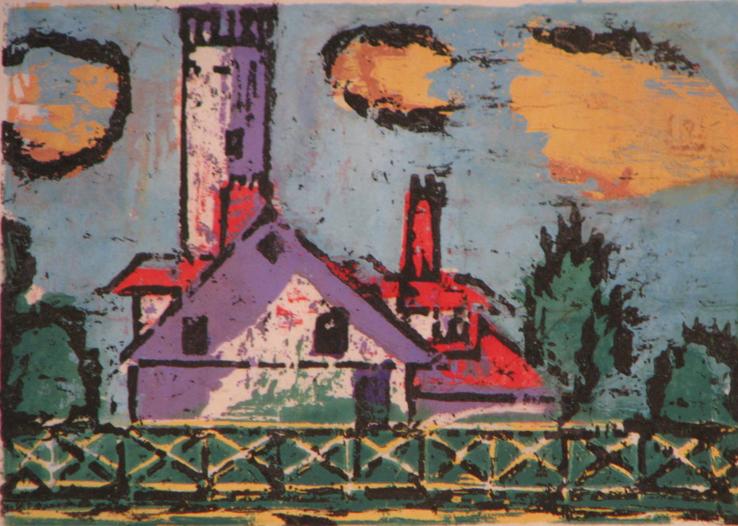 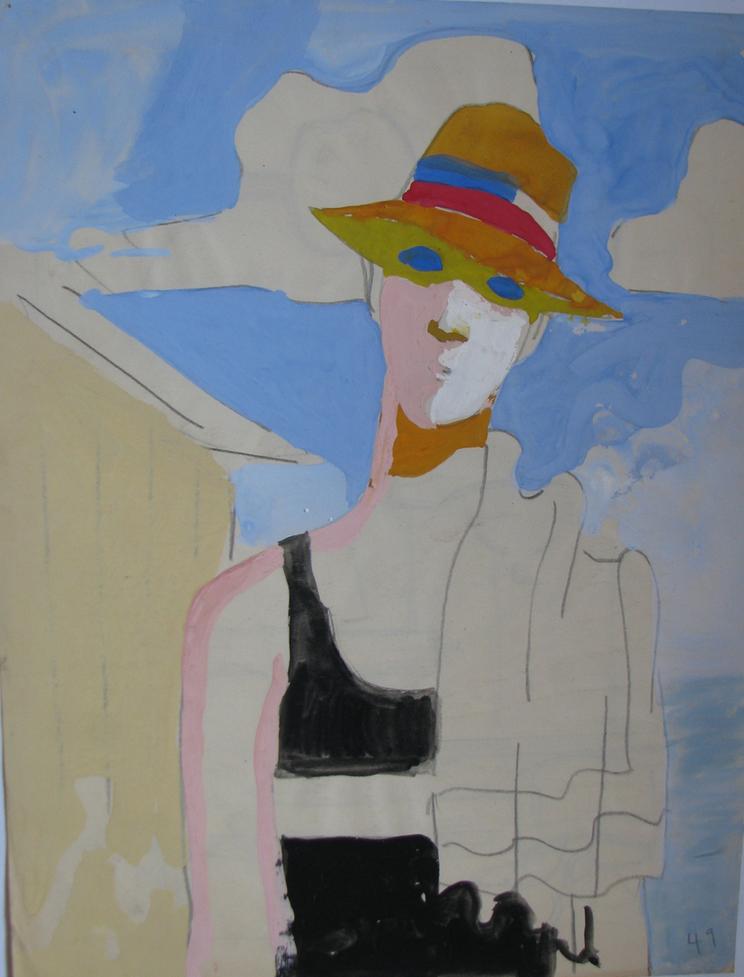 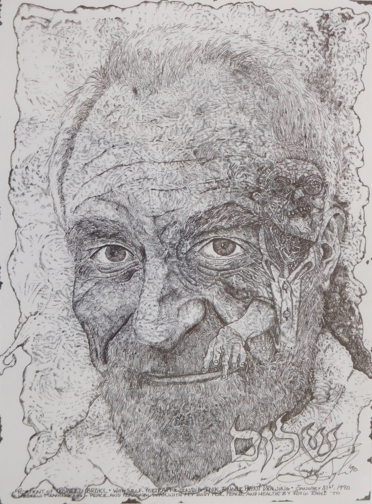 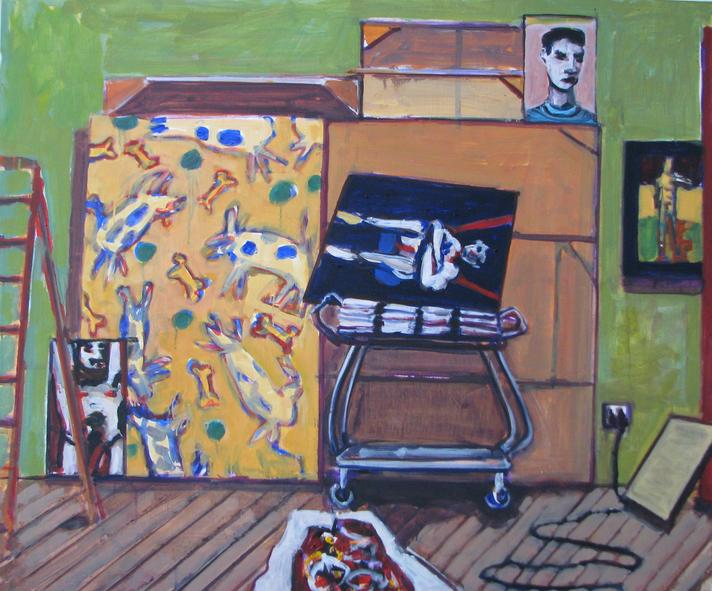