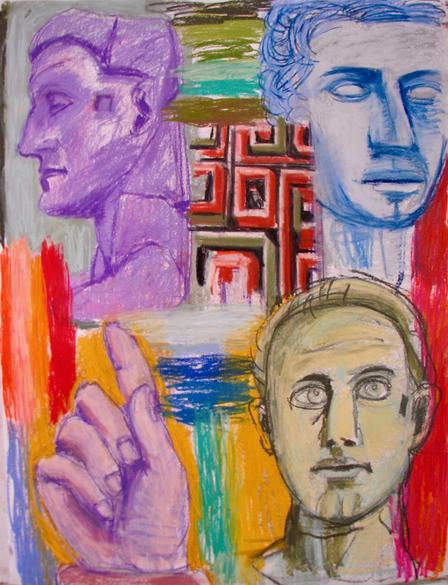 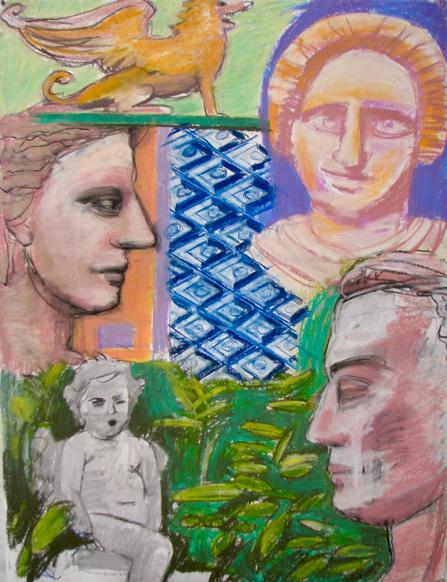 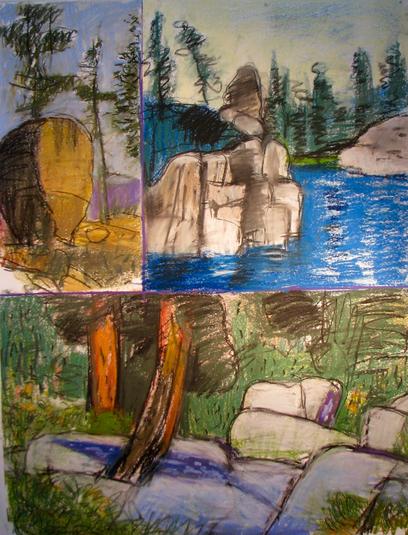 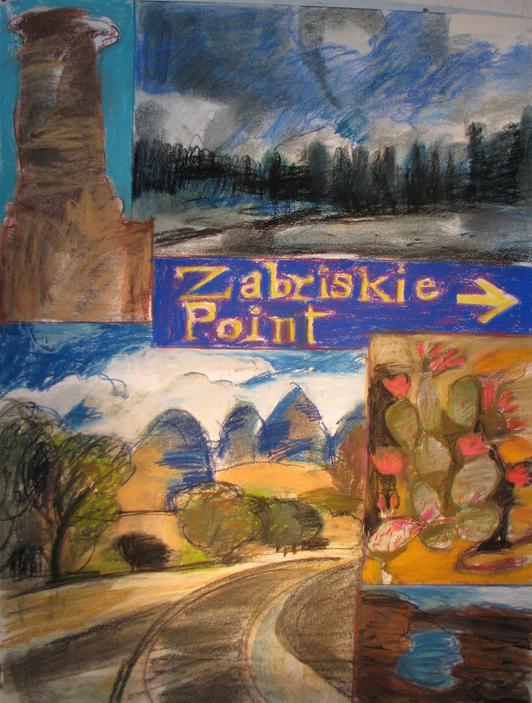 ​​​​Travel: the absence of things to argue about except where to have meals……

Mendocino is Brigadoon. The bluff/headland was where the mill existed until the 1960s. The sea is rough here, where the ships were loaded. Native Pomo Indians used shards of Export China from  ships they saw break up on the rocks.

One joy of revisiting  places is what you see and learn differently or anew. In 2016 and 2018, visiting the historic house museums, we were made aware through examples of her work and the lore that SF artist/printmaker Emmy Lou Packard, lifelong friend of Frida Kahlo/Diego Rivera, was instrumental in the late 60s to keep the bluff from being developed, after Boise/Cascade tore down the mill and wanted to sell the site for development. Her marriage was breaking up, but before she returned to SF, she launched the efforts to get the land got transferred to the State as parkland and the little town placed on the National Register. Mendocino remains intact, preserved like Sienna or Ouro Prieto, time warps, as the future moves on elsewhere.

To some, my efforts on behalf of preservation and neighborhood protection, were mistakes—--time I could have been doing art. Maybe they have  a point.  Just after I got my MFA, I devoted over 5 years to save our nearby historic high school, located on 9 acres. Originally, University High School, built 1922.  In the 1960s, as Merritt College, the Black Panther Party formed here---many of their members were students, their headquarters was in a nearby storefront. The otherwise forgettable movie, The Principal,  was filmed in the school, awaiting demolition.  Its derelict condition made it the ideal "troubled" urban high school. But after listing the site on the National Register of Historic places and a lawsuit in federal court, we won, also making the neighborhood safe for gentrifiers and yuppies----the law of “unintended consequences.” But we also got a vest-pocket park, a senior center, and a landmark housing a research institute.

So, thank you, Emmy Lou Packard, Mendocino is tonic for the soul. 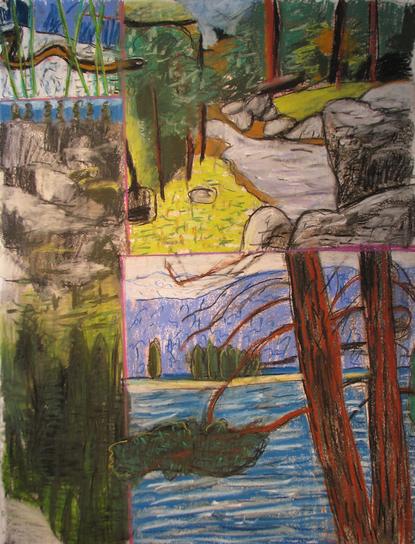 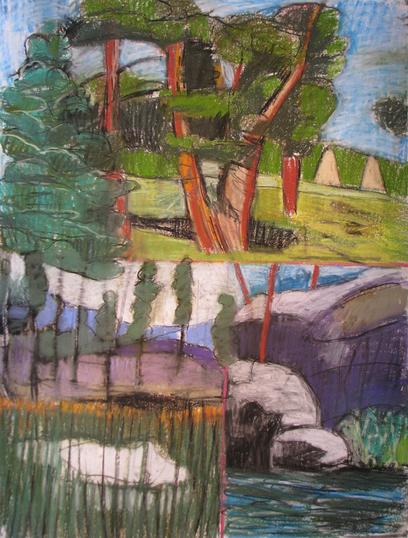 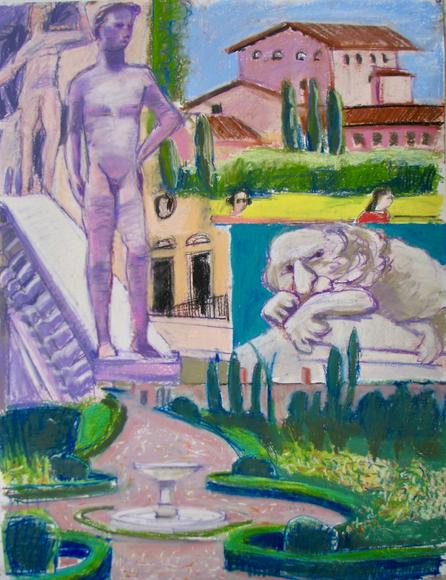 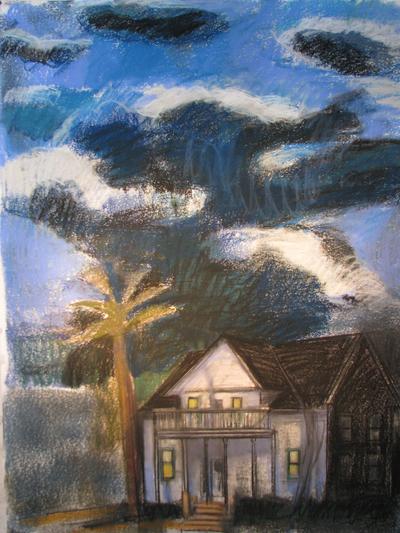 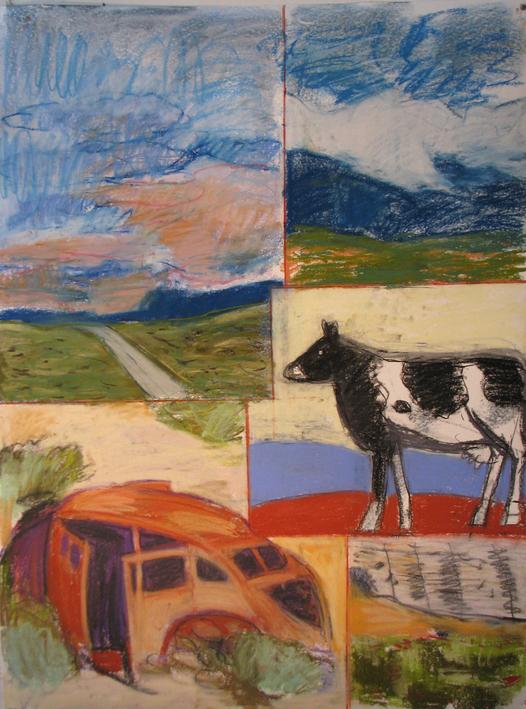 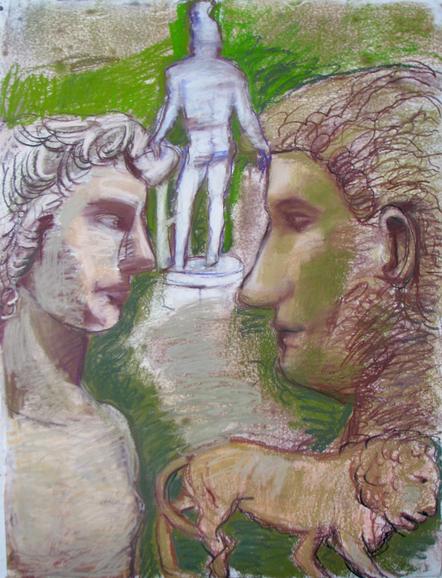 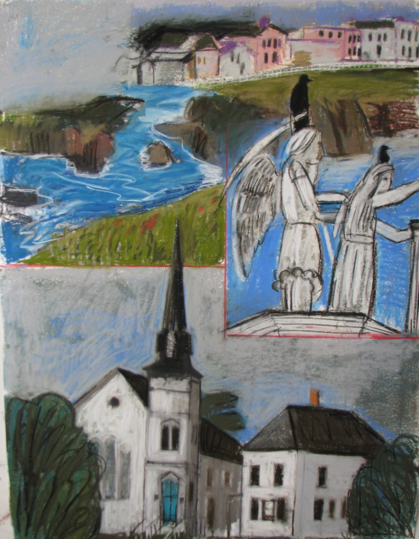 ​​So odd visiting Zabriskie Point in Death Valley--—the name of the Michelangelo Antonioni movie from 1970. His hate letter to capitalist/imperialist America, named or so I thought for the lowest point below sea level in North America. Youthful rebellion, hippies, ending with an explosion of consumer goods. The male lead, plucked from the streets, later died in prison in a weightlifting “accident,” after having been caught participating in a bank robbery in Boston. The movie coincided with my antiwar activist period, coming out, California…

According to Wikipedia, the movie is considered among the worst of all time, and nearly destroyed Antonioni’s career (cost $7 million, made $1 million)... 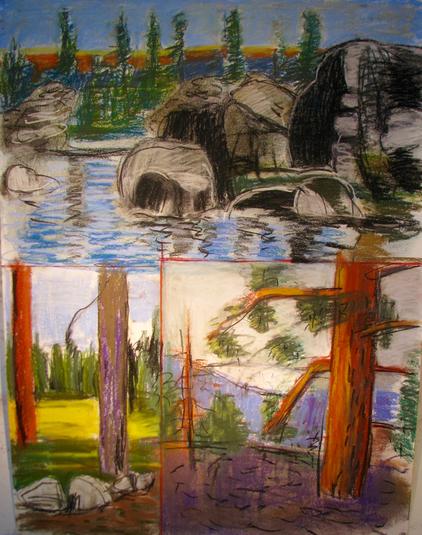 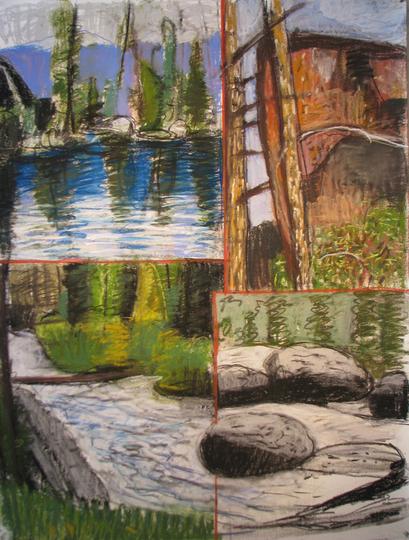 These drawings are from my last trip to Italy, after an absence of 25 years. Rome was familiar, albeit even more tidied up. Could the Trevi Fountain be any whiter—it resembles bleached coral or bone. Incongruous seeing a small, expensive Hopper show—the most American of artists, with his themes of alienation and loneliness accompanying urbanization—in the Complesso del Vittoriano, Ala Brasini Museum next to the Forum, of all places. The  Hopper lighthouse poster plastered on subways, buses. What could this mean? And Warhol in Noto, Sicily. Skipped that one.

Rome seems like Art itself, even the skies obligatory purple and gold at dusk.

Sicily was the revelation: Roman and Greek ruins and mosaics, Islamic influences, and Norman churches with glittering Byzantine mosaics. In Ragusa, experiencing the difference between ersatz, even if tony, with the real, when it came to accommodations, life. We found, through Lonely Planet, a room, suite actually, on the second floor of a family home. The bookshelves were lined with real books, unusual pictures and paintings, even an inlaid parquet bedside table wayward guests could easily ruin. The next morning, breakfast treats from the Dona de la Casa in their apartment. Later, we felt lucky to find a booking in pricey Taormina, in a hotel within walking distance of the main drag, Corso Umberto. By contrast with Ragusa, the “antiques” were reproductions, the “period” pictures were new, there was a “library” alcove in the corridor with generic books. Tasteful, but anonymous. And who would that matter to?

Taormina, where Oscar Wilde spent a month in 1898 in a hotel at 81 Corso Umberto, where Van Gloeden photographed Sicilian boys (yes, we should worry about this, ethically), and an ex-pat Englishwoman built an eccentric public garden, although her multistory follies of sticks and bricks now off-limits—structurally unsafe. The Greek Theatre is used for film festivals, we gawked at the luxury hotel frequented by Tennessee Williams, Capote, and Garbo. Before them, Taormina visitors included DH Lawrence, Gide, Goethe. Last and least, Taormina noted for the meeting of G-7 world leaders, where trump followed behind in his golf cart (!), as the others strolled ahead on Corso Umberto, the callow, gilded rube abroad no doubt missing the expanse of the blue sea in both directions and Mt. Etna off in the distance. 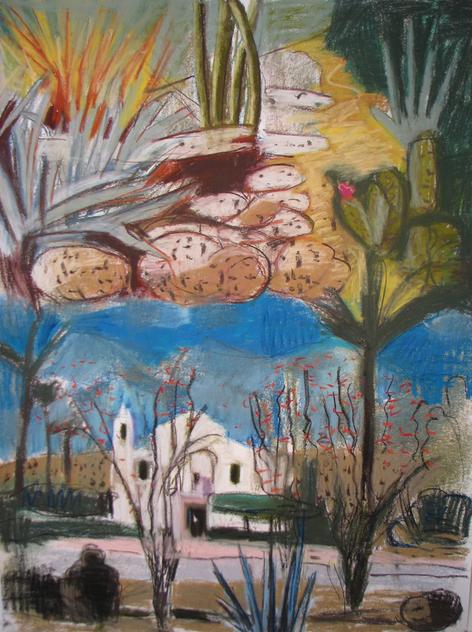 One of James Dean’s only three completed movies is luckily also a visual record of 1950's Mendocino. East of Eden was chosen as a stand-in for Monterey, which is on a bay, and was once a huge commercial fishing town. Neither of which are true of Mendocino, located on a rugged bluff on the turbulent Pacific. Mendocino is more austere, puritan.

The ocean off Mendocino is fierce, ships routinely sank, loading lumber and unloading passengers was hard. Monterey is a more protected bay, teeming with fish, seals, and wildlife.

But Eden contains wonderful shots of the sea, and images of old Mendocino, including part of Main St., demolished in the 60s. A female character in black head-to-toe costume, like the Degas etching of Mary Cassatt and her sister at the Louvre, walks along the boardwalk in the long, moody opening shot. The really curious thing is that the Dean character is totally anachronistic, with his method acting, wearing 50s chinos and sweaters, echt Rebel without a Cause.  Oddly contemporary, vital despite the death cult that overshadows his legacy. 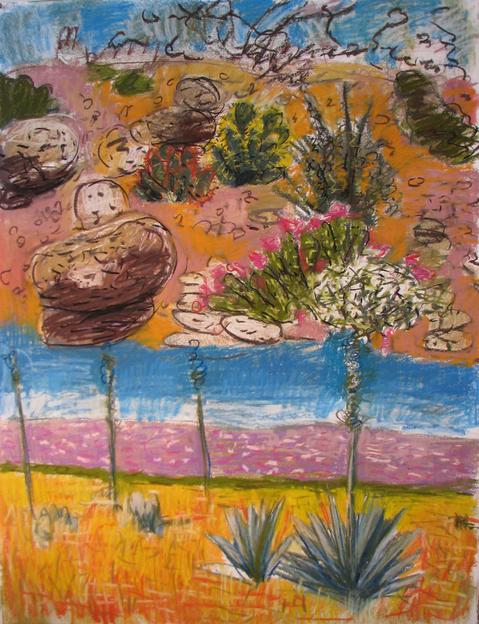 I was ambivalent about Ansel Adams. His work seemed so calendar/card material until we went on the trip to Mono Hot Springs/Ansel Adams Wilderness, and I was confronted with the source of his imagery, in the flesh as it were. I realized the effort involved in producing the pictures in not easily accessible places--—he often traveled in with mules and horses to these then remote areas. He was a founder of the Sierra Club--—his photographs were propaganda for preservation—--as much as some photographers like Cecil Beaton and Edward Steichen did for movie stars, he did for landscapes.

We were up in the Southern Sierra Nevadas, where there’s so much tree die-off----climate change no doubt. As the crow flies, we were only 25 miles or so from Bishop, the little town with the haunted house in my drawing, on the way to Death Valley, just mountain range and no roads in between. 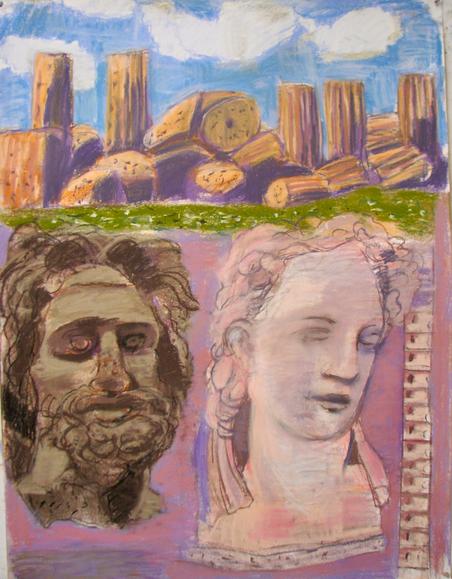 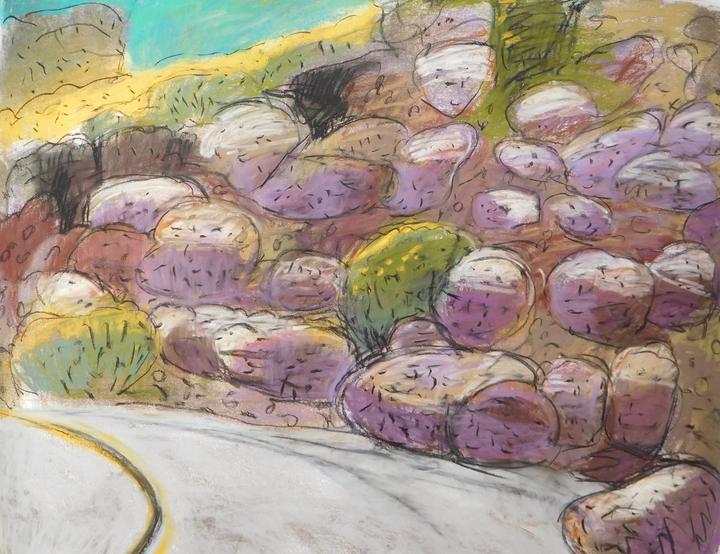 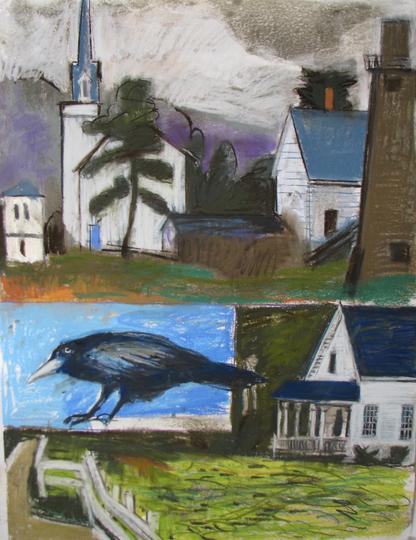 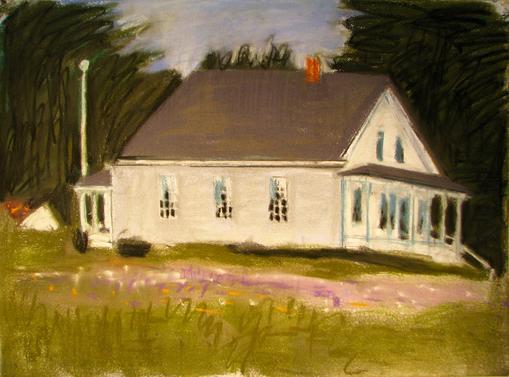 
Another Spring, another desert. But what a difference from Death Valley! Whereas Death Valley is already pared down and reduced for minimalist painting or photograph, Anza Borrego is lush with cactus and succulents. On the road to and from the little town of Julian (a destination for the pie a-la-mode dessert, not desert, hungry folks from San Diego), the landscape changed with every twist and turn of the road. Cholla, then yucca, then opuntia, then ocotillo-- laid out like a botanical garden.

Because of extreme summer temperatures and rigorous building codes imposed due to the risk of loose rock and gravel cascading down upon the little town of Borrego Springs in the event of heavy rain, development is unlikely. And with mandated water cutbacks, the grapefruit plantation may loose out. The desert prevails.