“…The three Virginia Woolf heads are based upon a photograph from May, 1926 of Woolf posing in her mother’s Victorian dress….Each head—--differently though they turned out—--was my earnest attempt to duplicate the photo image. Woolf—--along with Wilde, Beckman, Munch, and  Matisse—---is in my pantheon of artistic/literary heroes. Woolf is my role model for harnessing and transforming personal tragedies and difficulties into art.” 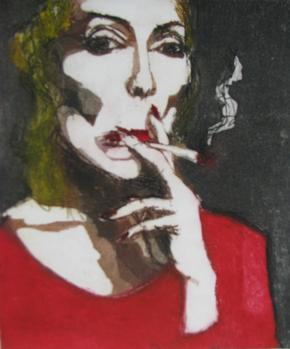 “Bay Area Figs" refers to the rivalry between the Bay Area Figurative moment and the “A.E” (Abstract Expressionist) practitioners. As if the camps were that distinct-—-Bay Area Figuration was noted for combining representational subject matter and the gestural painting of artists like de Kooning. And the Figs certainly weren’t oblivious to considerations of composition, form, and color, c.f. Diebenkorn’s logical, in retrospect, transition from figurative to abstract work, and then somewhat back again.

I was a student of Joan Brown, Elmer Bischoff, and Jay DeFeo, who is also hard to pigeonhole. Brown had been a student of both Bischoff and David Park, and Park and Bischoff were friends, teaching and playing in a jazz band together. So, even though Park died in 1960, being exposed to friends and students of Park, he wasn’t merely “art historical,” irrelevant, to me. Even more than their techniques, Park’s influence was evident in their independence of art world trends, their seriousness (even if their themes weren’t entirely), and their rebelliousness toward being saddled with a “signature style.”

“Painting remained an essentially moral enterprise—‘hard-bought,’ in Park’s words, and not ‘easily come by.’ ...'Art ought to be a troublesome thing,' said Park, 'and one of the reasons for painting representationally is that this makes for much more troublesome pictures'."
Art in the San Francisco Bay Area 1945-1980, by Thomas Albright

Park was indeed a Hero. (But don’t take my word for it---—read the Nancy Boas biography.)