My early experience with gay liberation and the “movement,” along with the pioneering example of other California-based artists like David Hockney, encouraged me to be bold with my subject matter. My vibrant, inspiring printmaking professor at UC-Berkeley, Sylvia Lark, was defiant about being hassled by Madison police for using photographs of nude men in her work while a student. I also met Richard Caldwell Brewer at his Top Floor Gallery show in San Francisco in 1979—---my work has never pushed the boundaries he dared to.

Thereby emboldened by the examples and derring-do of others, I depicted nudists at beaches in a series of paintings, drawings, and etchings. Hundreds made the trek to the stretch of nude beaches on the Russian River from the San Francisco Bay Area,  about 70 miles north, every weekend, in the pre-AIDS era.

It’s now been 40+ years that we’ve been going to the River. It winds through the vineyards, entering the Pacific at the little coastal town of Jenner, with fat seals on the beach.  The East Coast equivalent would perhaps be Fire Island, not that I’ve been. Back in the day, thousands went. Charter buses used to bring crowds from the Castro.

There were flamboyant spreads anticipating Burning Man in the fields on the way to the beaches; naked bears on horseback., on patrol, and the party continued into the night at nearby bars and inns in Monte Rio, Guernville, etc.

The river is not that deep, especially during drought times, warm water in the summer, the air temperature can be in the 90s. There was the gay male beach, lesbian beach, bi-beach, and the straight beach--—the lush vegetation on the riverbanks surrendered to the throngs. There was a “sex trail” through the woods.

The scene reached a national audience via gossip columnist Rona Barrett on ABC's Good Morning America when she announced that Fred MacMurray had thrown a party over the weekend at his Northern California ranch for thousands of partygoers, many nude. That must have been the tipping point for Sonoma County to make parking more restrictive, effectively shutting off access to the river.

The arrival of AIDS ended the party for good. Like that episode of Torchwood with John Barrowman, with the long-abandoned music hall and the tinkly, ghostly music in the building’s pores.  Now, with the revelers gone but for the passing boaters in their canoe rentals, the wood ducks, blue herons, vultures and ospreys abound, with even occasional sightings of river otters.

The land belonged to the movie star Fred MacMurray (Double Indemnity). We feared/assumed when he died it would be condos and development. Instead, it’s protected watershed and made available to school groups, but we found it harder and harder to walk in two-three miles in the heat, lugging raft and provisions.

In recent years, we've started using a nearby new Sonoma county park, created from environmental destruction: gravel removal from alongside the river had diverted the flow. When that stopped and the banks were revived, lakes were created in the gravel pits. Now we have a manageable half hour walk, dunking the dog, Beauregard, in a horse trough along the way to cool him off.  At the river bank, we inflate the raft, and paddle downstream to find “our” spot on the bank. There we swim, read, and endure the dog barking and spreading sand.

I was featured in a profile ("Painter-Activist in the Berkeley-Bloomsbury Traditions") in the Advocate in 1978, and afterward my etching, Russian River Nudists, was included in the Advocate-sponsored show in 1981 at the Hibbs Gallery in New York City, with other profiled artists including Tress, Mapplethorpe, and Platt-Lynes. 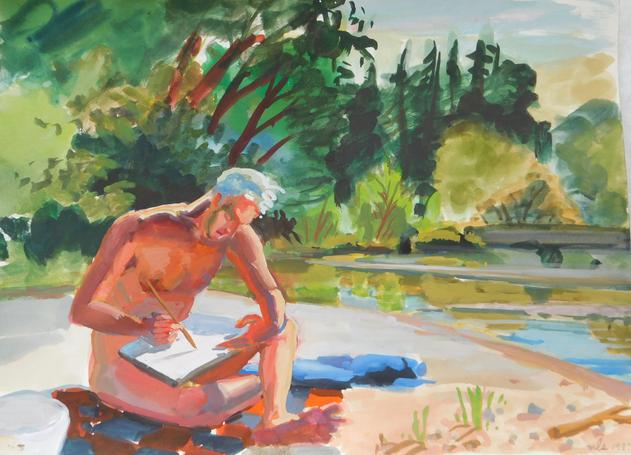