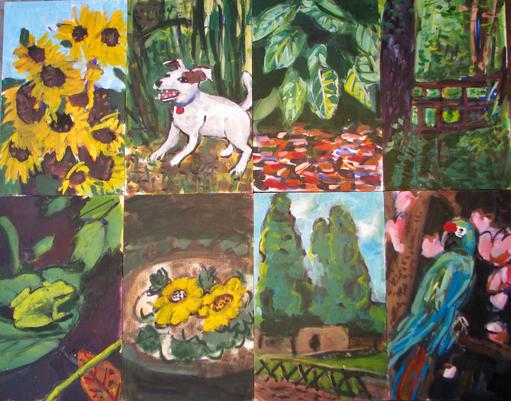 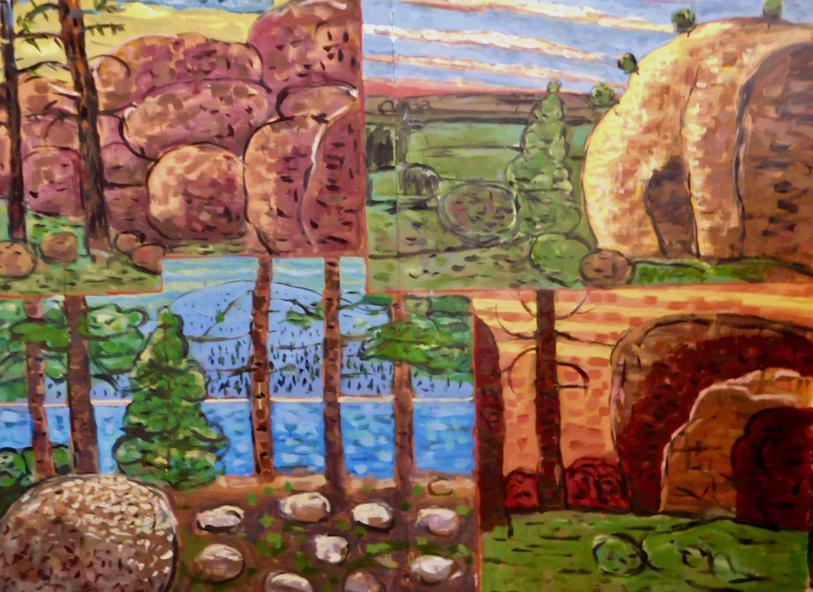 Doubling Down on Landscape

Do the times make the person, or, in this case, do the times dictate or direct the work? At this moment in our country’s history, when everything seems so at risk, and up in the air, I continue to explore landscape. The environment is in peril, not to mention our very survival as a species—the general threat to all plants and animals.  A 9/5/18 op ed in the New York Times described government plans to log up to 6,000 acres in every national forest, while evading environmental review, even for endangered species.

But while the political situation seems as dire as ever, resistance is afoot. Even in the forest.

On the recent trip back to Ansel Adams Wilderness that included hikes to Devil’s Bathtub and other destinations, I saw the forest up close, and it’s not as bad as it appears from the road. Yes, there are abundant dead trees—climate change and pests the likely cause, on top of the usual cycles of death and renewal—but there are also young trees starting up everywhere. Indeed, the forest landscape of my own backyard, such as Marin’s Mt. Tamalpais, can be more off-putting—pines planted for lumber are cycling out at the same time, vast standing tree cemeteries.

My other major source of recent imagery has been Death Valley, a landscape so severe and minimal as to be nearly abstracted already. The conditions are so harsh there that developers early on, such as the Borax Smith Company, segued from mining and mineral extraction to tourism promotion.

My Mendocino work includes the built environment—elemental 19th Century structures, primarily stark white with black accents on trim, clinging to a bluff and lashed by wind, rain, and waves. These simple, abstracted buildings might as well be rocks themselves.

I am trying to understand the lure of these majestic landscapes for me, and find my place in the company of other artists drawn to the natural world, for respite, succor, inspiration.  Berkeley artist Chiura Obata, who was interred and ended as a UC-Berkeley faculty member, produced many drawing and and prints of the iconic Yosemite imagery. Marsden Hartley made Maine’s Mt. Katahdin his own, the way Georgia O’Keefe, Peter Hurd, and Maynard Dixon made southwest motifs theirs.

In the past, I’ve explored the Midwestern landscape, too, partly as a distraction from problematic familial connections, the purpose of the visits. But I could never personalize or imbed myself in rolling cornfields and stylized trees like Grant Wood. Once you’ve flown the nest…..

A common thread in several cultures and religions is a belief in animism, spirits or souls in animate or inanimate things, from American Indians worshipping weather, sun and moon, as well as objects in the landscape, to practitioners of Shintoism in Japan, believing in “kami,” an essence found in trees, unusual rocks, rivers, waterfalls. My goal is to give my own trees, rocks, and streams that presence and power.

I want to remain open to nature, and to art and artists that have put their own spin on it. Leave the city, explore the landscape, learn what it has to teach me. Hope it helps tether me in these troubled times. 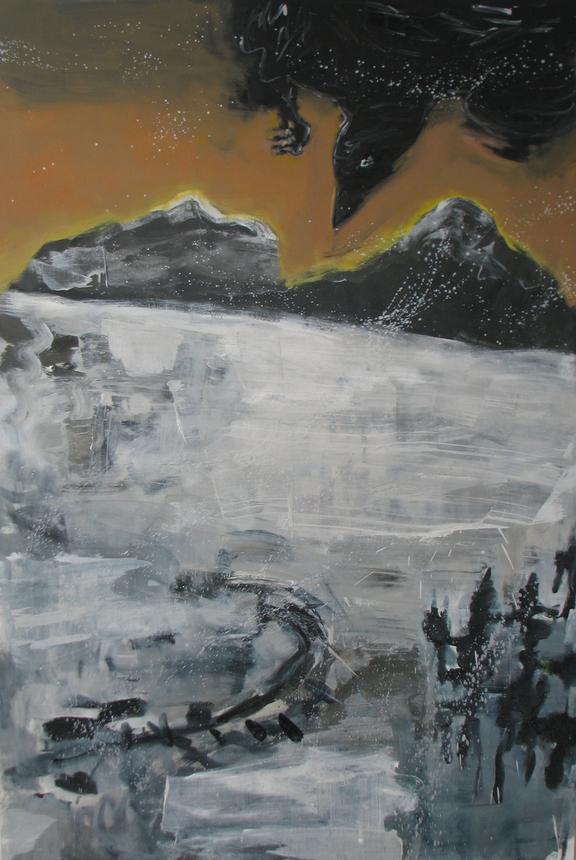 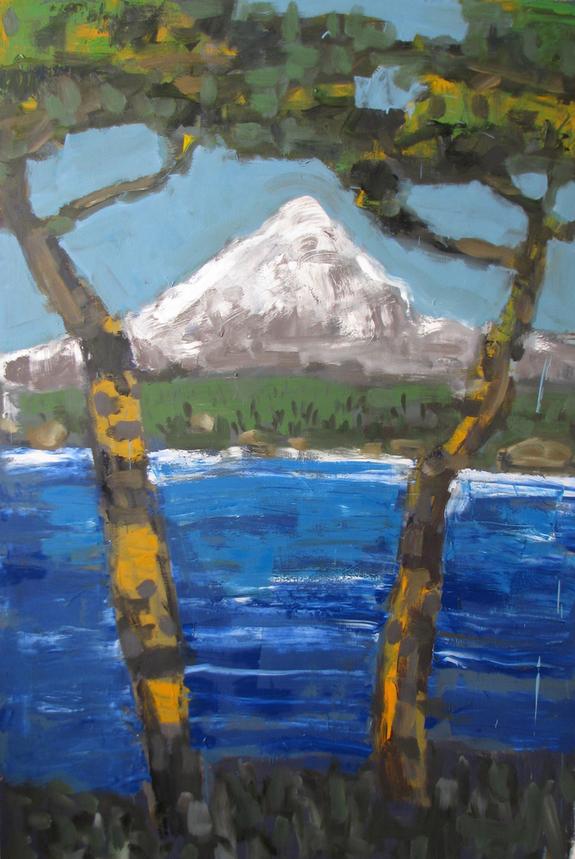 One can blame the political climate for—and on—many things, but for me one effect has been an acceleration of my affinity for landscape in my work. Of late, I’ve embraced, not resisted, this pull, with more work—painting, drawings, and prints—that involve the landscape directly. With the climate, the air, forests, seas, and wildlife, under threat as never before, embracing and describing landscape seems in itself political, although I’ve shied away from doing overtly political art work, which always seems ham-fisted when I do it. (Goya and Dix had a knack.) So, just as actions that seem normal and prosaic in a democracy can be subversive or even dangerous elsewhere, celebrating landscape can itself be provocative—a statement.

While I happily accept my place in the long tradition of figurative painting in the Bay Area, which also often involved the figure in the landscape, I’ve somehow accepted the primacy of the figure. I long ago rejected the hierarchy of painting and sculpture over works on paper, but being called a “landscape painter” still seems something of a put-down. No more.

I look hard at the various ways Asian artists describe leaves and trees, different brushstrokes and patterns, and the techniques European artists such as Lorrain and Rembrandt use to represent oaks and willows. In their work, forests have as many characters as a crowd by Ensor.

One epiphany from last year came from the stay at Mono Hot Springs, in the Southern Sierra Nevadas. Passing the dead pines—pests and drought—on the way in. The Springs are on the edge of the vast Ansel Adams Wilderness, which stretches all the way to Yosemite. Shock is perhaps not too strong a word to describe my reaction to seeing Ansel Adams imagery in the flesh, as it were. Tule and Doris Lakes, cold, deep blue water against rough-hewn granite boulders, sequoias twisted with wind and age, allowed me to see what Adams and Weston had seen. I had dismissed Adams’ work, partly prejudice remembering reading about his “dark room tricks,” but also being deadened to the imagery by commercialization and overabundant reproductions. Only now I realize how his work was propaganda--weaponized Beauty--for protection and appreciation of these largely unspoiled spots.

I use the words “largely unspoiled” with reservation, since it is the California of Joan Didion’s elegiac Where I was From and Gray Brechin’s righteous polemics like Imperial San Francisco: Urban Power, Earthly Ruin about the exploitation of this state’s rich natural “assets.” Not to mention Indian genocide, described in the article “Goodbye, Yosemite. Hello, What?”, in the 9/3/17 New York Times. Indeed, the return trip to the area this year revealed the existence of immense reservoirs, Lakes Edison and Florence, and vast infrastructure, that collect and pump the water for hydroelectric power for the populous southern megalopolis. A local proudly called it “the hardest working water in the world.” And one is still chilled going through the Owens Vally on the way to Death Valley, remembering the haunting Chinatown movie and the water grab. Signs of the water diversion are everywhere, including the sparse population.

Also, ghostly Manzanar, where Japanese from Southern California were interned, which has been recreated as a memorial, since the original Manzanar was basically leveled, as if to erase a nightmare, and assuage terrible guilt. Only a few trees and shrubs remain of the original camp—gardens by the internees gone wild.

I am a gardener and a farmer, it’s in my DNA. I was born on a farm in Northern Wisconsin, my parents were as hardscrabble as the growing season was short. My father farmed, hunted, trapped, and logged, trying to make a go of it, but—with three young children—they gave up, sold the 80 acres for a pittance and the sway-back horse to the glue factory, and moved to what was becoming a Milwaukee suburb. For years, my father kept a backyard vegetable garden, drawing irrigation water from the creek. I grew flowers nearby, in my own plot.

I am also enough of a traveller and artist to have an appreciation of the difference between a “garden,” something arranged and planned, with landscapes less contrived and managed. Gardens resemble paintings—formal like Versailles, staged informal like Giverney—a set for Monet, or Japanese gardens with their calculated air of naturalness. Chinese urban gardens are more stylized, plants controlled by hardscape, and the roving visitor offered pre-arranged views. I’ve used both kinds of these landscapes in my work. My years of channeling Japanese woodblock prints was influenced by artists like Hiroshige’s or Hokusai’s response to landscape, and the role of people in it, pummeled by rain or admiring a mountain or moon.

Indeed, gardens and Ukiyo-e are remarkably alike. Ukiyo-e refers to the “Floating World” of fleeting pleasures, gardens exist only as long as they’re maintained, however nonchalant they may appear. Vita Sackville-West’s famous Sissinghurst gardens, for instance, are re-creations.

Embracing the depiction of landscape wholeheartedly, not simply overcoming some internal resistance, may also be a life raft, helping me to survive this difficult period in America.

​An artist friend started avidly collecting vintage postcards, and she generously send me some that reminded her of my work.

​
Postcards from this pre-Kodak camera era, and long before Facebook, seem aestheticized boasts to friends and relatives that received them: I saw this, and you didn’t. “Money shots” of tourist “honey pots.”

I picked the cards that stirred me most—the task for making paintings from them was to find the source material under the beautified glamour. Research after the fact revealed that some of the sights no longer even existed, like Shasta Springs in California. 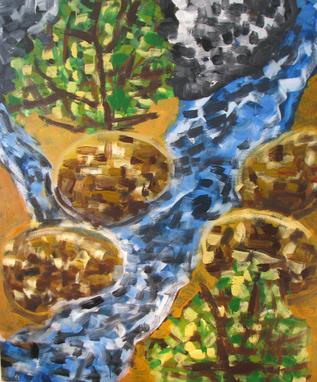 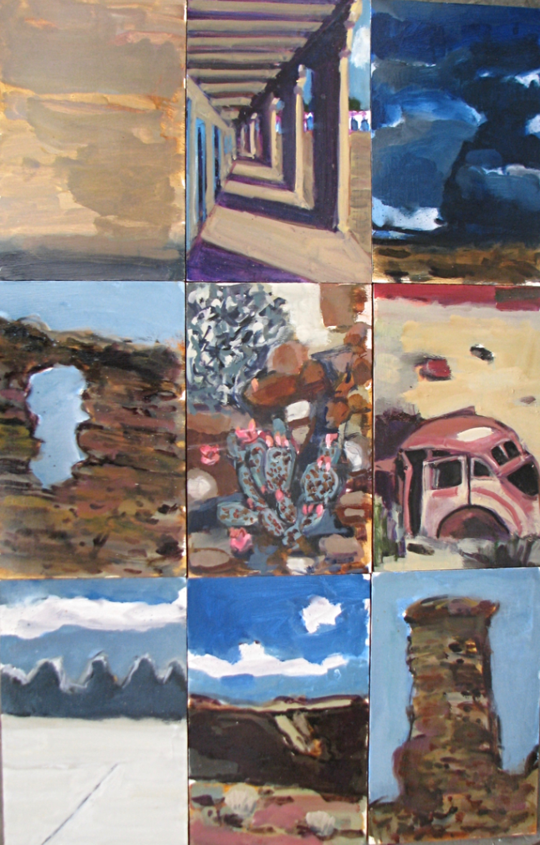 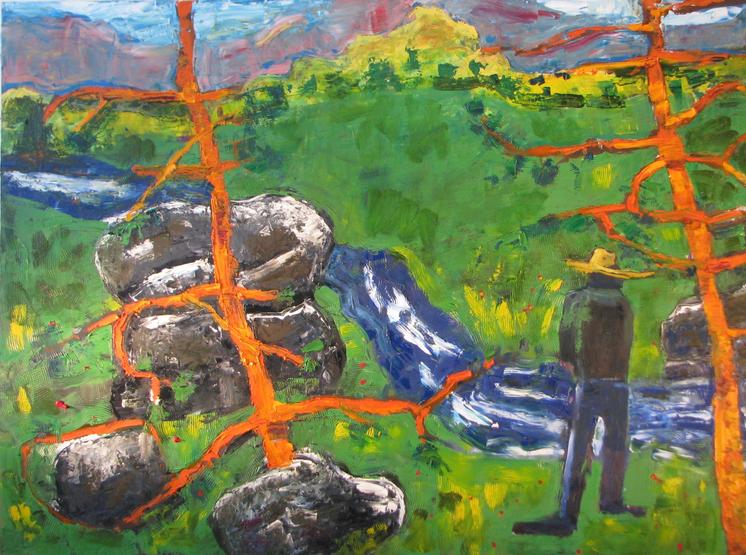 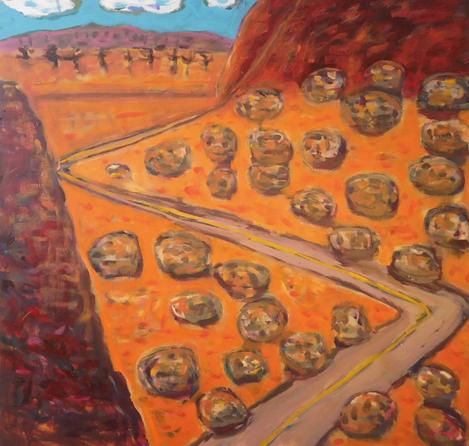 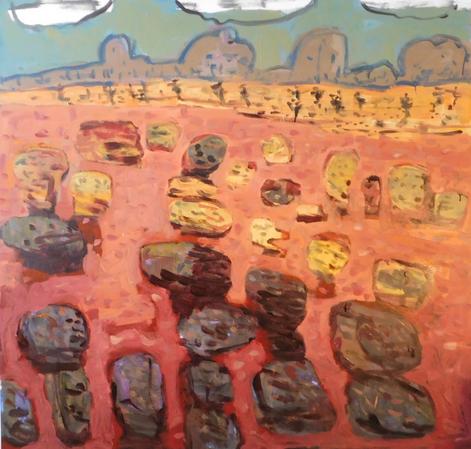 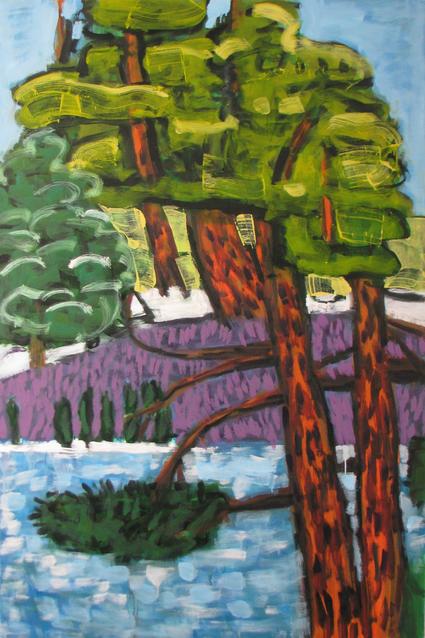 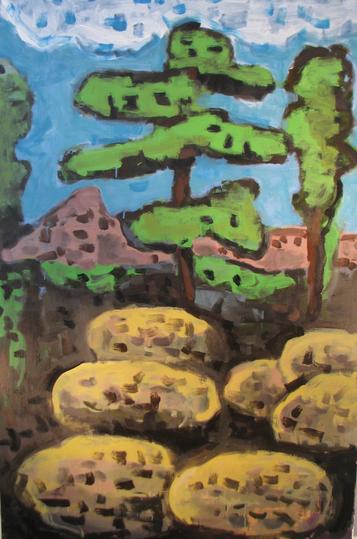 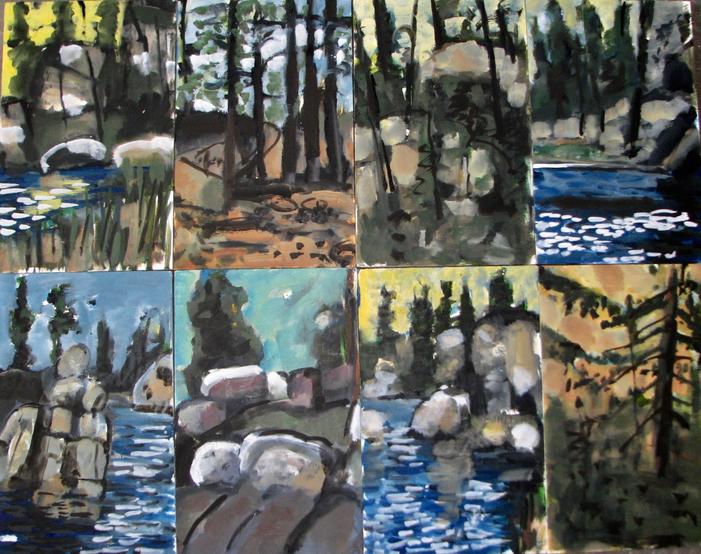