At UC-Berkeley, I studied with such luminaries of the Bay Area Figurative School as Joan Brown, Elmer Bischoff, and Hassel Smith, as well as such distinguished abstract painters as Jay DeFeo and David Simpson.

I was awarded in 2006 an Adolph and Esther Gottlieb Foundation individual artist support grant, one of twelve awarded nationally.

My work since 1978 has appeared in such national and international exhibitions as the 1992 Biennial and 1998 Triennial International Exhibitions of Woodcut and Wood-Engraving at the State Gallery, Banska Bystrica, Slovakia (catalogues),  Figurative Painting in the ‘80s, RuggieroHenis Gallery, New York, N.Y., and the International Biennial of Graphic Art, Invitational, Ljubljana, Yugoslavia (1987). I sent work by invitation from 1990 until 2007 to the annual International Impact Art Festivals, held at the Kyoto City Museum, Kyoto, Japan (catalogues).

I was artist-in-residence at the new de Young Museum in June, 2006-- in its first year after reopening,  working on site in the Kimball Gallery, with a solo show of paintings, drawings, and prints. Other museum shows were Beyond the Likeness: Self-Portraits by California Artists at the Triton Museum of Art in Santa Clara, Ca. and Menagerie: Artists Look at Animals at the Museum of Craft and Folk Art in San Francisco, both in 2006.

My work has been shown at the San Francisco Museum of Modern Art Artists Gallery since 1982, including being featured in shows in 1983, 1993, 1999, and 2008 (the Faraway Places exhibit). I was included in Summer Introductions at the Seattle Art Museum Gallery in 2007, and the 1987 and 1989  (catalogue) Recent Acquisitions exhibitions at the Achenbach Foundation for the Graphic Arts, Fine Arts Museums of San Francisco. Nine of my woodblock prints are included in the Achenbach Foundation’s permanent collection.

I exhibited large bodies of work at Los Medanos College, Pittsburg, Ca. with M. Louise Stanley in 2002 and at the Fresno (Ca.) Art Museum with Michael J. Carey in 2003.  I have been featured in Berkeley Art Festival pop-up shows in 2010 (solo) and 2011-12 at the Acheson Building, curating the exhibitions with Alfred Crofts, and in the In Extremis--Prints Monumental, Intimate and Encompassing exhibit at the Meridian Gallery in San Francisco in 2011. I have been in two exhibitions at the Falkirk Cultural Center in San Rafael: The Big Brush-off in 2005 and a California Society of Printmakers (CSP) exhibit of “traditional” printmaking in 2006. As President of the CSP in 1982, I helped to organize the organization's membership exhibition Contemporary California Prints at the San Jose Museum of Art and the Richard L. Nelson Gallery at UC-Davis in 1982. I've participated in many other CSP exhibits, and my woodblock illustrated in California Society of Printmakers: One Hundred Years 1913-2013 was acquired by the Library of Congress, Washington, D.C. , joining two other woodblocks already in their collection. 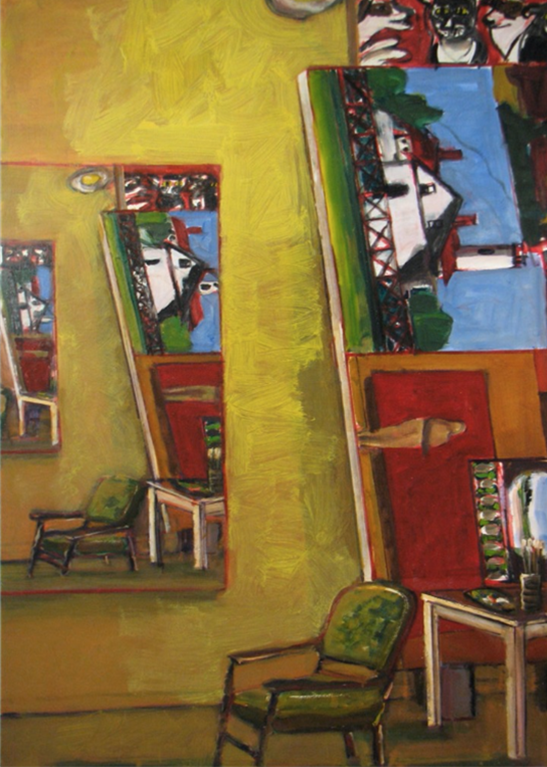